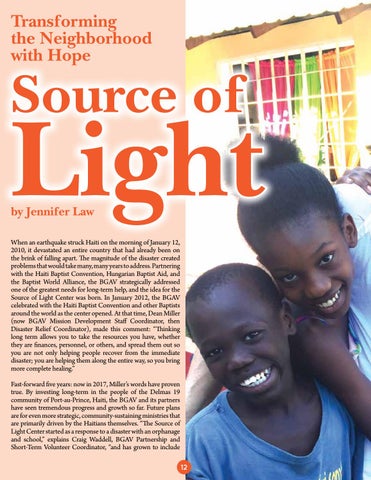 Transforming the Neighborhood with Hope

When an earthquake struck Haiti on the morning of January 12, 2010, it devastated an entire country that had already been on the brink of falling apart. The magnitude of the disaster created problems that would take many, many years to address. Partnering with the Haiti Baptist Convention, Hungarian Baptist Aid, and the Baptist World Alliance, the BGAV strategically addressed one of the greatest needs for long-term help, and the idea for the Source of Light Center was born. In January 2012, the BGAV celebrated with the Haiti Baptist Convention and other Baptists around the world as the center opened. At that time, Dean Miller (now BGAV Mission Development Staff Coordinator, then Disaster Relief Coordinator), made this comment: “Thinking long term allows you to take the resources you have, whether they are finances, personnel, or others, and spread them out so you are not only helping people recover from the immediate disaster; you are helping them along the entire way, so you bring more complete healing.” Fast-forward five years: now in 2017, Miller’s words have proven true. By investing long-term in the people of the Delmas 19 community of Port-au-Prince, Haiti, the BGAV and its partners have seen tremendous progress and growth so far. Future plans are for even more strategic, community-sustaining ministries that are primarily driven by the Haitians themselves. “The Source of Light Center started as a response to a disaster with an orphanage and school,” explains Craig Waddell, BGAV Partnership and Short-Term Volunteer Coordinator, “and has grown to include 12 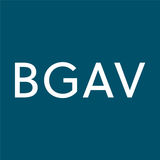