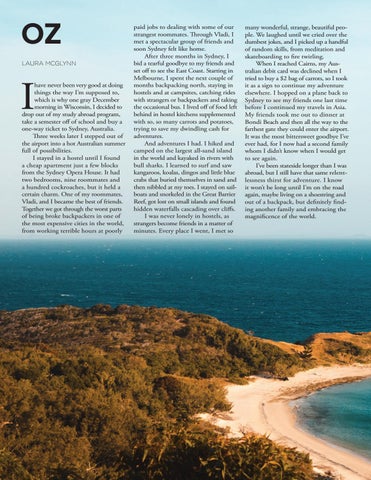 have never been very good at doing things the way I’m supposed to, which is why one gray December morning in Wisconsin, I decided to drop out of my study abroad program, take a semester off of school and buy a one-way ticket to Sydney, Australia. Three weeks later I stepped out of the airport into a hot Australian summer full of possibilities. I stayed in a hostel until I found a cheap apartment just a few blocks from the Sydney Opera House. It had two bedrooms, nine roommates and a hundred cockroaches, but it held a certain charm. One of my roommates, Vladi, and I became the best of friends. Together we got through the worst parts of being broke backpackers in one of the most expensive cities in the world, from working terrible hours at poorly

paid jobs to dealing with some of our strangest roommates. Through Vladi, I met a spectacular group of friends and soon Sydney felt like home. After three months in Sydney, I bid a tearful goodbye to my friends and set off to see the East Coast. Starting in Melbourne, I spent the next couple of months backpacking north, staying in hostels and at campsites, catching rides with strangers or backpackers and taking the occasional bus. I lived off of food left behind in hostel kitchens supplemented with so, so many carrots and potatoes, trying to save my dwindling cash for adventures. And adventures I had. I hiked and camped on the largest all-sand island in the world and kayaked in rivers with bull sharks. I learned to surf and saw kangaroos, koalas, dingos and little blue crabs that buried themselves in sand and then nibbled at my toes. I stayed on sailboats and snorkeled in the Great Barrier Reef, got lost on small islands and found hidden waterfalls cascading over cliffs. I was never lonely in hostels, as strangers become friends in a matter of minutes. Every place I went, I met so

many wonderful, strange, beautiful people. We laughed until we cried over the dumbest jokes, and I picked up a handful of random skills, from meditation and skateboarding to fire twirling. When I reached Cairns, my Australian debit card was declined when I tried to buy a $2 bag of carrots, so I took it as a sign to continue my adventure elsewhere. I hopped on a plane back to Sydney to see my friends one last time before I continued my travels in Asia. My friends took me out to dinner at Bondi Beach and then all the way to the farthest gate they could enter the airport. It was the most bittersweet goodbye I’ve ever had, for I now had a second family whom I didn’t know when I would get to see again. I’ve been stateside longer than I was abroad, but I still have that same relentlessness thirst for adventure. I know it won’t be long until I’m on the road again, maybe living on a shoestring and out of a backpack, but definitely finding another family and embracing the magnificence of the world.

The spring 2018 print issue of Souvenirs features UW-Madison students' photographs and experiences from their travels across the globe.