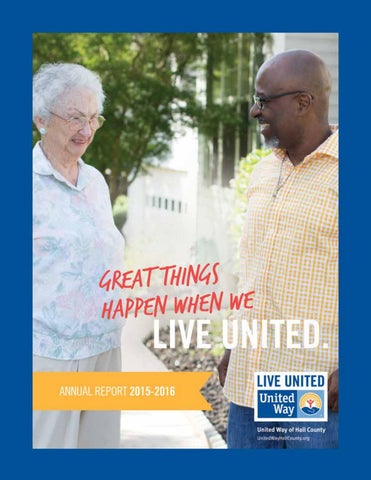 * Members of the Executive Committee.

GREAT THINGS HAPPEN WHEN YOU LEAVE A LEGACY. It has been an honor to serve our community as United Way of Hall County’s Board of Directors Chair. This year has been a year of change and transition for United Way of Hall County. Our board has been busy identifying what this place needs, from strategic planning for the future focus of United Way, to doing the seemingly impossible – finding a replacement for our fearless leader, Jackie Wallace. At United Way we strive to have our finger on the pulse of Hall County. I am proud that our organization is not afraid to grow and adjust to the community’s evolving needs. The United Way of today is not the same one that my father led more than 39 years ago and that is due largely in part to the leadership and guidance of our outgoing President and CPO, Jackie Wallace. I want to take this opportunity on behalf of our community to thank Jackie for her tireless dedication to United Way and her lasting legacy on our community. It was 2000 when Jackie began working at United Way. A new century had begun, Y2K scares were abounding and Jackie received a six-month contract to help support the campaign efforts that year. Sixteen years later, nine of which she has served as President and CPO, Jackie has continued to be the heart and soul of United Way. Jackie’s influence has helped shape the entire nonprofit community through her leadership and passion. Under her direction United Way has invested more than $28 million in Hall County and has partnered to help start two new nonprofits, the Georgia Mountain Food Bank and WomenSource. But Jackie will quickly note that what truly matters from her time at United Way is YOU. The relationships with donors, volunteers, funded programs and those we serve. In honor of Jackie’s tireless work, I challenge you all to find a way to leave your legacy in our community. From the smallest things to the largest, we all have the ability to impact the lives of our community. That is what is so amazing about leaving a legacy. You don’t even realize you are doing it until it is done. I agree with Jackie, what this place needs is YOU. Because great things happen when we LIVE UNITED.

What this place needs is bright futures, healthy lifestyles, thriving families and dedicated volunteers to help get it all done. This year United Way’s tremendous volunteer leadership has spearheaded the organization’s efforts and united passions, resources and expertise to focus on the building blocks of a good life. Below are a few highlights from the year: BOARD CHAIR, PHILIP WILHEIT JR. • Lead United Way of Hall County’s board of directors in strategic planning and visioning efforts to identify the future focus for United Way. • Provided support and guidance to the search committee, chaired by Davis White, tasked with selecting a new President and Chief Professional Officer (CPO). • Met with community leadership to understand the pulse of the community and our greatest needs.

CAMPAIGN CHAIRMAN, BRETT FOWLER • Led the community in a successful campaign, raising more than $1.59 million to be invested in the funded programs in 2016-2017. • Introduced the concept of workplace volunteerism at the Campaign Kickoff where attendees put together 1,000 literacy, health and income kits to be used throughout the community.

COMMUNITY INVESTMENT CHAIR, LAUREN SAMPLES • Led the selection committee as they continued the funded program model by funding 43 programs from 25 organizations. (see list below) • Reviewed outcome reports for all funded programs from 2015-2016 and evaluated program’s impact, as well as helped to identify patterns in our community’s greatest needs.

Each year, the Chairman’s Award is given to one company that demonstrates high campaign excellence and whose support extends far beyond the annual campaign giving. Our GIVE, ADVOCATE and VOLUNTEER Awards recognize individuals who have gone beyond the call and truly embody the work of United Way.

• C  HAIRMAN’S AWARD – Merial Select quadrupled their campaign in 2014, and this year continued that growth by raising an additional $6,000, totaling more than $45,000 in the last five years. In addition, Merial Select employees Sharon Holt and David Smith have dedicated their time to United Way, lending their time and expertise as volunteer leaders.

 IVE AWARD – Members of The Alexis • G De Tocqueville Society were recognized for their leadership in giving more than $3.6 million since the group’s inception. • A  DVOCATE AWARD – Mimi Collins for providing a voice for children in our community and being committed to making Hall County a better place through her tireless efforts to advocate for the well-being of our children. • V  OLUNTEER AWARD – Spence Price for his leadership on the United Way finance committee for six years and chairing the committee for the past four.

When you invest in United Way of Hall County, you are strengthening the building blocks of a good quality of life â&#x20AC;&#x201C; Education, Income and Health. We all have the power to make a difference in our community by finding our voice and joining it with others. Advancing the common good is less about helping one person at a time and more about changing systems to help us all. United Way of Hall County Leadership Giving Circle is a group of passionate business and community leaders who exemplify commitment and caring through their philanthropic nature and are change agents in Hall County. The United Way of Hall County Leadership Giving Circle comprises six leadership giving levels and was founded this year as a way to honor and thank our donors who give $1,000 or more annually to invest in the future. As a member of the Leadership Giving Circle you secure a place within Hall County as a guardian for the future. The power and value of your investment goes far beyond the dollars. That is because leadership ultimately inspires, motivates and transforms your life and the lives of others, while connecting the community.

*Charter members of the Tocqueville Society founded in 1995 that continue today.

GIVE. ADVOCATE. VOLUNTEER. CONNECT WITH US unitedwayhallcounty.org