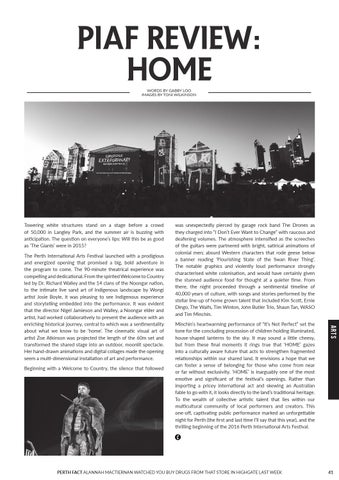 Towering white structures stand on a stage before a crowd of 50,000 in Langley Park, and the summer air is buzzing with anticipation. The question on everyone’s lips: Will this be as good as ‘The Giants’ were in 2015?

Beginning with a Welcome to Country, the silence that followed

Minchin’s heartwarming performance of “It’s Not Perfect” set the tone for the concluding procession of children holding illuminated, house-shaped lanterns to the sky. It may sound a little cheesy, but from these final moments it rings true that ‘HOME’ gazes into a culturally aware future that acts to strengthen fragmented relationships within our shared land. It envisions a hope that we can foster a sense of belonging for those who come from near or far without exclusivity. ‘HOME’ is inarguably one of the most emotive and significant of the festival’s openings. Rather than importing a pricey international act and skewing an Australian fable to go with it, it looks directly to the land’s traditional heritage. To the wealth of collective artistic talent that lies within our multicultural community of local performers and creators. This one-off, captivating public performance marked an unforgettable night for Perth (the first and last time I’ll say that this year), and the thrilling beginning of the 2016 Perth International Arts Festival.

The Perth International Arts Festival launched with a prodigious and energized opening that promised a big, bold adventure in the program to come. The 90-minute theatrical experience was compelling and dedicational. From the spirited Welcome to Country led by Dr. Richard Walley and the 14 clans of the Noongar nation, to the intimate live sand art of Indigenous landscape by Wongi artist Josie Boyle, it was pleasing to see Indigenous experience and storytelling embedded into the performance. It was evident that the director Nigel Jamieson and Walley, a Noongar elder and artist, had worked collaboratively to present the audience with an enriching historical journey, central to which was a sentimentality about what we know to be ‘home’. The cinematic visual art of artist Zoe Atkinson was projected the length of the 60m set and transformed the shared stage into an outdoor, moonlit spectacle. Her hand-drawn animations and digital collages made the opening seem a multi-dimensional installation of art and performance.

was unexpectedly pierced by garage rock band The Drones as they charged into “I Don’t Ever Want to Change” with raucous and deafening volumes. The atmosphere intensified as the screeches of the guitars were partnered with bright, satirical animations of colonial men; absurd Western characters that rode geese below a banner reading ‘Flourishing State of the Swan River Thing’. The notable graphics and violently loud performance strongly characterised white colonisation, and would have certainly given the stunned audience food for thought at a quieter time. From there, the night proceeded through a sentimental timeline of 40,000 years of culture, with songs and stories performed by the stellar line-up of home grown talent that included Kim Scott, Ernie Dingo, The Waifs, Tim Winton, John Butler Trio, Shaun Tan, WASO and Tim Minchin. 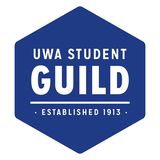