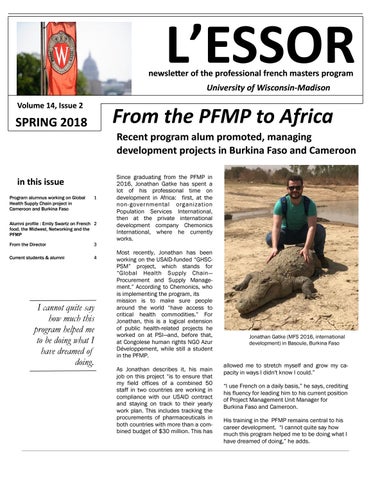 From the PFMP to Africa

Alumni profile : Emily Swartz on French 2 food, the Midwest, Networking and the PFMP From the Director

I cannot quite say how much this program helped me to be doing what I have dreamed of doing.

Since graduating from the PFMP in 2016, Jonathan Gatke has spent a lot of his professional time on development in Africa: first, at the non-governmental organization Population Services International, then at the private international development company Chemonics International, where he currently works. Most recently, Jonathan has been working on the USAID-funded “GHSCPSM” project, which stands for “Global Health Supply Chain— Procurement and Supply Management.” According to Chemonics, who is implementing the program, its mission is to make sure people around the world “have access to critical health commodities.” For Jonathan, this is a logical extension of public health-related projects he worked on at PSI—and, before that, at Congolese human rights NGO Azur Développement, while still a student in the PFMP. As Jonathan describes it, his main job on this project “is to ensure that my field offices of a combined 50 staff in two countries are working in compliance with our USAID contract and staying on track to their yearly work plan. This includes tracking the procurements of pharmaceuticals in both countries with more than a combined budget of $30 million. This has

allowed me to stretch myself and grow my capacity in ways I didn&#39;t know I could.” “I use French on a daily basis,” he says, crediting his fluency for leading him to his current position of Project Management Unit Manager for Burkina Faso and Cameroon. His training in the PFMP remains central to his career development. “I cannot quite say how much this program helped me to be doing what I have dreamed of doing,” he adds.

What do you do now for a living? I am a Food Trade Advisor with Business France, the French Trade Commission, in Chicago. Essentially, my job is to help French food businesses come to the US. We do this by conducting market research studies on the US market, specifically addressing the client’s business sector; making contacts with American food industry professionals to set up B2B meetings; attending trade shows; sending American companies on sourcing trips to France; and setting up events for French companies to make business and customer contacts in the States.

How did the PFMP help you get there? I would not have known about the job without the PFMP, because the person who held this position before me is a fellow PFMP alum! He sent me the job posting and encouraged me to apply. I use my French every day at my job, and the business vocabulary I learned while studying in Madison has helped me immensely. Studying the French management style helped me to understand what to expect from the organization when I started. Finally, my internship in Québec gave me market research and project management experience, and more generally made me comfortable with working in French.

Emily Swartz (MFS 2017, business), at Schwartz’s Deli in Montreal. Emily did her PFMP internship at the Fondation Québec Philanthrope and now works for Business France. She lives in Chicago.

Studying the French management style helped me to understand what to expect from the organization when I started.

What are the biggest challenges in your line of work these days? I have only been with Business France for a few months, so I am not yet an expert in this line of work, but one thing that I have encountered is a lack of interest in the Midwest. Many French companies are interested in the East and West Coasts, but they do not know much about the Midwest, so they don’t immediately consider it when planning where to export. When speaking with French clients, I emphasize how important this market is in the food industry, as well as the regional differences from places like New York and California.

What do you hope your work will accomplish? I hope to make French food more accessible to more Americans. One of my coworkers and fellow PFMP alum, John Brunner, has worked to make contacts with American companies like Dollar General, and I hope to make more contacts with similar retailers. Just because it’s French doesn’t mean it has to be snooty! (continued on page 3

From the Director : Use Your French It’s official: in our eighteenth year, the PFMP is now too large and too active for us to be able to include all contributions to our semester newsletter. The popularity of our “Alumni Profile” and other alumni-themed articles, combined with the regular updates in “Current Students and Alumni,” have created a real uptick in information flow from our alumni to the program, for publication in L’ESSOR. That’s what we’d call a good problem. Good because more stories in these pages help us illustrate even more clearly the personalized experience of the Professional French Masters Program. The program “experience” involves our alumni beyond the occasional event or fundraiser. Our students do actual research with the help of PFMP alumni. (See Emily Swartz’s Alumni Profile on page 2.) A research project on importing

French wine to the United States requires not only reading books and scholarly articles. In the PFMP, it also means contacting alumni who work in the field, to interview them about law, marketing, and even the aesthetics of wine label design. Eventually, that’s how you get to the job. It flows in the other direction, too. In their internships in French-speaking countries, PFMP students often find themselves in a uniquely favorable position of helping their colleagues do market research on U.S. clienteles. In her recent internship at Mylopy, a Paris start-up whose mission is to connect visitors with locals in Paris and other large cities, Abby Rue (business) spent part of her time carefully researching American tourism trends abroad, so that Mylopy might market to that clientele more effectively. If you are just discovering the PFMP, I would encourage you to think of this newsletter as a narrative, a constantlyunfolding story… with lots of characters. The sheer excitement our students and alumni show in contributing to L’ESSOR indicates their investment, not only in their own graduate education in the use of professional French, but in the community of others devoted to that same goal. As unique as our students and alumni are, they do tend to share that passion for using their French. But they also understand that the art of networking is often harder and more intensive then they had expected. And that, in the PFMP, it is one of the primary tools of our craft.

Networking can get you the job, but in the Professional French Masters Program it is also one of the primary tools of our craft.

Swartz (continued from p. 2) Any suggestions for prospective students considering the PFMP? I think there are two really important skills that the PFMP helps develop in students: adaptability and networking. Many PFMP students have experience living and working in France before starting the program, but the PFMP really delves into the reasons behind why the French (and people from other cultures, for that matter)

are different from Americans. The French communicate very differently from Americans at work, for example. The PFMP also helped me get really comfortable with networking, and when I came home from my internship I immediately started reaching out to alums. All the alums I reached out to were very encouraging and helpful, and some even said that because they had been helped in the past by other alumni, they wanted to “pay it forward” by helping me. Because of the alumni network, I was able to secure a job within one month of starting my job hunt.

I was able to secure a job within one month of starting my job hunt.

Sarah Craver (MFS 2012, media/arts/cultural production) is the Program Coordinator for MIT-France and Belgium. In collaboration with Laura Gross (MFS 2012), she is developing an international arts residency program.

A program associate at FHI 360 in Washington, DC, Serena Berkowitz (MFS 2017, international education) works on the U.S. Department of State&#39;s Sports Visitor and Sports Envoy program. She will be coordinating incoming groups of international coaches and youth athletes, and her first assignment is accompanying a group of Zambian wheelchair basketball coaches to the National Wheelchair Basketball Tournament in Louisville this April.

Katrina Brown (MFS 2013, international education) is Manager for Programs and Operations in Learning Abroad at the University of Utah.

Jessica Dean (Certificate 2014, business) is a software developer and technical writer at Flow Auto in Greensboro, North Carolina. When she was hired, Jessica was told that her “work in France and obvious ambition” were central in getting her the job.

After eight years as a writer and research analyst in Pennsylvania state government (six years at the PA House of Representatives and two years with the PA Early Learning Investment Commission), and then two years spent doing freelance political and strategic communications consulting, Gretchen Dlugolecki (MFS 2008, EU affairs) is now Director at Fairmount Media, a digital media firm based in Philadelphia.

PFMP students and tutors at the Fall 2017 Orientation reception

Now in her fourth year at Champagne LaurentPerrier, Kathleen Patterson (MFS 2010, business) has been promoted to National Accounts Manager. Based in New York City, she will be responsible for working with distributors across the country to establish and grow existing business in larger chain retail stores, restaurant organizations, and hotel groups. Program alumni Christopher Quinlan (MFS 2003, international development) and Jennifer Quinlan (MFS 2005, international education) both work for Brigham Young University. Chris is an International Studies Program Director, and Jennifer is an Academic Consultant &amp; PhD candidate in Second Language Acquisition. They are both featured guest lecturers, where they often highlight experiences and professional knowledge gained through the PFMP: Chris in French Business, grant writing, and international development courses, and Jen in Linguistics and Second Language Acquisition Teaching M.A. courses.

Amy Musser (MFS 2012, business) has left her position as Communications Manager at Redfin and is now the Director of Public Relations &amp; Promotions at Sugar Mountain, a Seattle-based national creative food company that manages several culinary brands, restaurants and a nonprofit that educates children and adults on how to make healthy food choices through interactive cooking classes. This year she will travel to France for a cheese festival and to an island off the coast of Madagascar to participate in a reforestation project. Janet Noel (business, 2016) est actuellement professeur de français à Las Cruces High School (Nouveau Mexique). Emily Ostenson (MFS 2013, international education) works at the University of Massachusetts-Amherst, where she is Study Abroad Advisor for France and Italy Programs.

Cassandra Tant (back row), with CEI colleagues in Saint-Malo.

The newsletter of the University of Wisconsin-Madison Professional French Masters Program, with news on how its students and alumni use their French in their work.