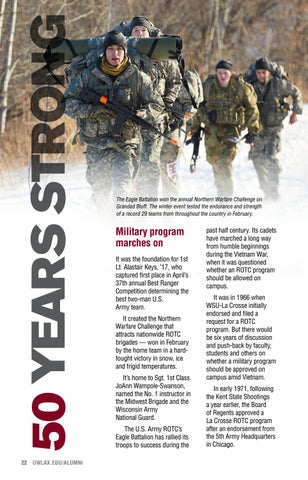 The Eagle Battalion won the annual Northern Warfare Challenge on Grandad Bluff. The winter event tested the endurance and strength of a record 29 teams from throughout the country in February.

Military program marches on It was the foundation for 1st Lt. Alastair Keys, ’17, who captured first place in April’s 37th annual Best Ranger Competition determining the best two-man U.S. Army team. It created the Northern Warfare Challenge that attracts nationwide ROTC brigades — won in February by the home team in a hardfought victory in snow, ice and frigid temperatures. It’s home to Sgt. 1st Class JoAnn Wampole-Swanson, named the No. 1 instructor in the Midwest Brigade and the Wisconsin Army National Guard. The U.S. Army ROTC’s Eagle Battalion has rallied its troops to success during the

past half century. Its cadets have marched a long way from humble beginnings during the Vietnam War, when it was questioned whether an ROTC program should be allowed on campus. It was in 1966 when WSU-La Crosse initially endorsed and filed a request for a ROTC program. But there would be six years of discussion and push-back by faculty, students and others on whether a military program should be approved on campus amid Vietnam. In early 1971, following the Kent State Shootings a year earlier, the Board of Regents approved a La Crosse ROTC program after an endorsement from the 5th Army Headquarters in Chicago.