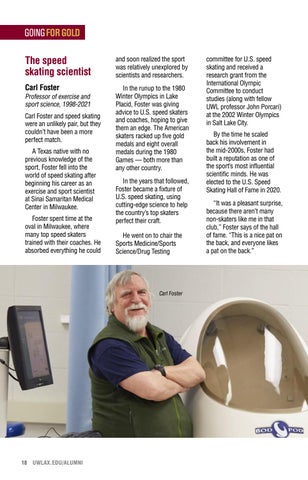 and soon realized the sport was relatively unexplored by scientists and researchers.

In the runup to the 1980 Winter Olympics in Lake Placid, Foster was giving advice to U.S. speed skaters and coaches, hoping to give them an edge. The American skaters racked up five gold medals and eight overall medals during the 1980 Games — both more than any other country.

Professor of exercise and sport science, 1998-2021 Carl Foster and speed skating were an unlikely pair, but they couldn’t have been a more perfect match. A Texas native with no previous knowledge of the sport, Foster fell into the world of speed skating after beginning his career as an exercise and sport scientist at Sinai Samaritan Medical Center in Milwaukee. Foster spent time at the oval in Milwaukee, where many top speed skaters trained with their coaches. He absorbed everything he could

In the years that followed, Foster became a fixture of U.S. speed skating, using cutting-edge science to help the country’s top skaters perfect their craft. He went on to chair the Sports Medicine/Sports Science/Drug Testing

committee for U.S. speed skating and received a research grant from the International Olympic Committee to conduct studies (along with fellow UWL professor John Porcari) at the 2002 Winter Olympics in Salt Lake City. By the time he scaled back his involvement in the mid-2000s, Foster had built a reputation as one of the sport’s most influential scientific minds. He was elected to the U.S. Speed Skating Hall of Fame in 2020. “It was a pleasant surprise, because there aren’t many non-skaters like me in that club,” Foster says of the hall of fame. “This is a nice pat on the back, and everyone likes a pat on the back.”