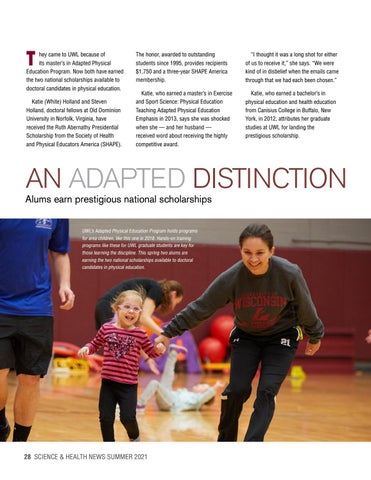 hey came to UWL because of its master’s in Adapted Physical Education Program. Now both have earned the two national scholarships available to doctoral candidates in physical education. Katie (White) Holland and Steven Holland, doctoral fellows at Old Dominion University in Norfolk, Virginia, have received the Ruth Abernathy Presidential Scholarship from the Society of Health and Physical Educators America (SHAPE).

The honor, awarded to outstanding students since 1995, provides recipients $1,750 and a three-year SHAPE America membership.

“I thought it was a long shot for either of us to receive it,” she says. “We were kind of in disbelief when the emails came through that we had each been chosen.”

Katie, who earned a master’s in Exercise and Sport Science: Physical Education Teaching Adapted Physical Education Emphasis in 2013, says she was shocked when she — and her husband — received word about receiving the highly competitive award.

Katie, who earned a bachelor’s in physical education and health education from Canisius College in Buffalo, New York, in 2012, attributes her graduate studies at UWL for landing the prestigious scholarship.

Alums earn prestigious national scholarships UWL’s Adapted Physical Education Program holds programs for area children, like this one in 2018. Hands-on training programs like these for UWL graduate students are key for those learning the discipline. This spring two alums are earning the two national scholarships available to doctoral candidates in physical education.