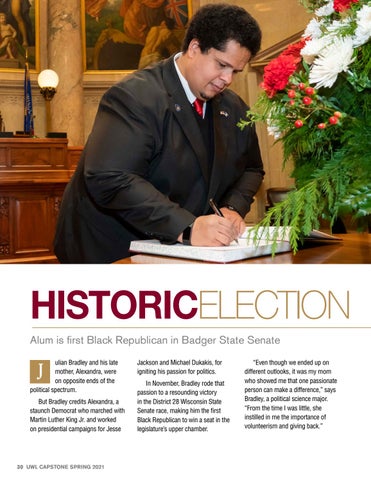 HISTORICELECTION Alum is first Black Republican in Badger State Senate ulian Bradley and his late mother, Alexandra, were on opposite ends of the political spectrum.

But Bradley credits Alexandra, a staunch Democrat who marched with Martin Luther King Jr. and worked on presidential campaigns for Jesse

Jackson and Michael Dukakis, for igniting his passion for politics. In November, Bradley rode that passion to a resounding victory in the District 28 Wisconsin State Senate race, making him the first Black Republican to win a seat in the legislature’s upper chamber.

“Even though we ended up on different outlooks, it was my mom who showed me that one passionate person can make a difference,” says Bradley, a political science major. “From the time I was little, she instilled in me the importance of volunteerism and giving back.”