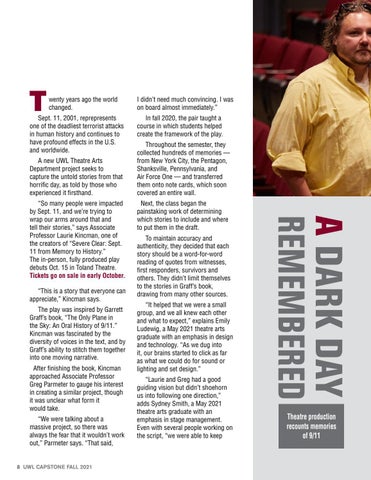 wenty years ago the world changed.

Sept. 11, 2001, reprepresents one of the deadliest terrorist attacks in human history and continues to have profound effects in the U.S. and worldwide. A new UWL Theatre Arts Department project seeks to capture the untold stories from that horrific day, as told by those who experienced it firsthand.

“This is a story that everyone can appreciate,” Kincman says. The play was inspired by Garrett Graff’s book, “The Only Plane in the Sky: An Oral History of 9/11.” Kincman was fascinated by the diversity of voices in the text, and by Graff’s ability to stitch them together into one moving narrative. After finishing the book, Kincman approached Associate Professor Greg Parmeter to gauge his interest in creating a similar project, though it was unclear what form it would take. “We were talking about a massive project, so there was always the fear that it wouldn’t work out,” Parmeter says. “That said,

In fall 2020, the pair taught a course in which students helped create the framework of the play. Throughout the semester, they collected hundreds of memories — from New York City, the Pentagon, Shanksville, Pennsylvania, and Air Force One — and transferred them onto note cards, which soon covered an entire wall. Next, the class began the painstaking work of determining which stories to include and where to put them in the draft. To maintain accuracy and authenticity, they decided that each story should be a word-for-word reading of quotes from witnesses, first responders, survivors and others. They didn’t limit themselves to the stories in Graff’s book, drawing from many other sources. “It helped that we were a small group, and we all knew each other and what to expect,” explains Emily Ludewig, a May 2021 theatre arts graduate with an emphasis in design and technology. “As we dug into it, our brains started to click as far as what we could do for sound or lighting and set design.” “Laurie and Greg had a good guiding vision but didn’t shoehorn us into following one direction,” adds Sydney Smith, a May 2021 theatre arts graduate with an emphasis in stage management. Even with several people working on the script, “we were able to keep

“So many people were impacted by Sept. 11, and we’re trying to wrap our arms around that and tell their stories,” says Associate Professor Laurie Kincman, one of the creators of “Severe Clear: Sept. 11 from Memory to History.” The in-person, fully produced play debuts Oct. 15 in Toland Theatre. Tickets go on sale in early October.

I didn’t need much convincing. I was on board almost immediately.”