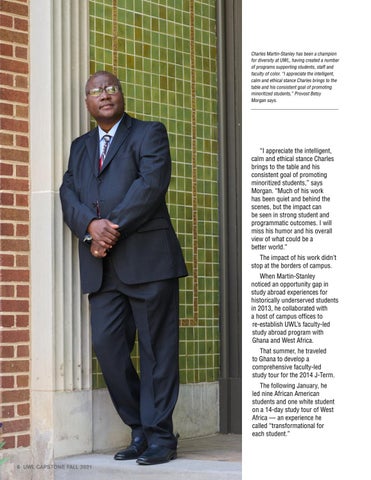 Charles Martin-Stanley has been a champion for diversity at UWL, having created a number of programs supporting students, staff and faculty of color. “I appreciate the intelligent, calm and ethical stance Charles brings to the table and his consistent goal of promoting minoritized students,” Provost Betsy Morgan says. ____________________________________

“I appreciate the intelligent, calm and ethical stance Charles brings to the table and his consistent goal of promoting minoritized students,” says Morgan. “Much of his work has been quiet and behind the scenes, but the impact can be seen in strong student and programmatic outcomes. I will miss his humor and his overall view of what could be a better world.” The impact of his work didn’t stop at the borders of campus. When Martin-Stanley noticed an opportunity gap in study abroad experiences for historically underserved students in 2013, he collaborated with a host of campus offices to re-establish UWL’s faculty-led study abroad program with Ghana and West Africa. That summer, he traveled to Ghana to develop a comprehensive faculty-led study tour for the 2014 J-Term. The following January, he led nine African American students and one white student on a 14-day study tour of West Africa — an experience he called “transformational for each student.”