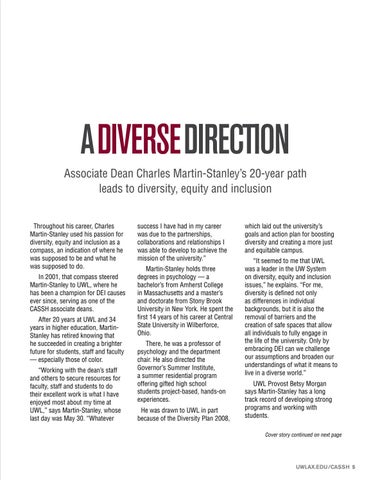 A DIVERSE DIRECTION Associate Dean Charles Martin-Stanley’s 20-year path leads to diversity, equity and inclusion Throughout his career, Charles Martin-Stanley used his passion for diversity, equity and inclusion as a compass, an indication of where he was supposed to be and what he was supposed to do. In 2001, that compass steered Martin-Stanley to UWL, where he has been a champion for DEI causes ever since, serving as one of the CASSH associate deans. After 20 years at UWL and 34 years in higher education, MartinStanley has retired knowing that he succeeded in creating a brighter future for students, staff and faculty — especially those of color. “Working with the dean’s staff and others to secure resources for faculty, staff and students to do their excellent work is what I have enjoyed most about my time at UWL,” says Martin-Stanley, whose last day was May 30. “Whatever

success I have had in my career was due to the partnerships, collaborations and relationships I was able to develop to achieve the mission of the university.” Martin-Stanley holds three degrees in psychology — a bachelor’s from Amherst College in Massachusetts and a master’s and doctorate from Stony Brook University in New York. He spent the first 14 years of his career at Central State University in Wilberforce, Ohio. There, he was a professor of psychology and the department chair. He also directed the Governor’s Summer Institute, a summer residential program offering gifted high school students project-based, hands-on experiences. He was drawn to UWL in part because of the Diversity Plan 2008,

which laid out the university’s goals and action plan for boosting diversity and creating a more just and equitable campus. “It seemed to me that UWL was a leader in the UW System on diversity, equity and inclusion issues,” he explains. “For me, diversity is defined not only as differences in individual backgrounds, but it is also the removal of barriers and the creation of safe spaces that allow all individuals to fully engage in the life of the university. Only by embracing DEI can we challenge our assumptions and broaden our understandings of what it means to live in a diverse world.” UWL Provost Betsy Morgan says Martin-Stanley has a long track record of developing strong programs and working with students. Cover story continued on next page