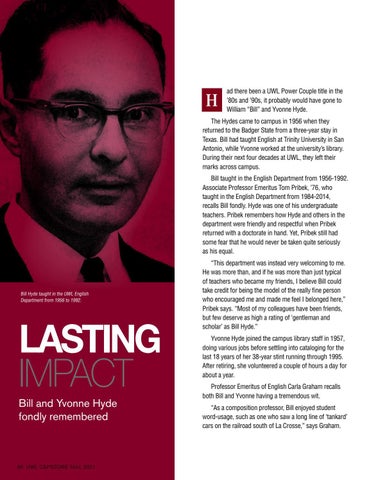 ad there been a UWL Power Couple title in the ’80s and ’90s, it probably would have gone to William “Bill” and Yvonne Hyde.

The Hydes came to campus in 1956 when they returned to the Badger State from a three-year stay in Texas. Bill had taught English at Trinity University in San Antonio, while Yvonne worked at the university’s library. During their next four decades at UWL, they left their marks across campus. Bill taught in the English Department from 1956-1992. Associate Professor Emeritus Tom Pribek, ’76, who taught in the English Department from 1984-2014, recalls Bill fondly. Hyde was one of his undergraduate teachers. Pribek remembers how Hyde and others in the department were friendly and respectful when Pribek returned with a doctorate in hand. Yet, Pribek still had some fear that he would never be taken quite seriously as his equal.

“This department was instead very welcoming to me. He was more than, and if he was more than just typical of teachers who became my friends, I believe Bill could take credit for being the model of the really fine person who encouraged me and made me feel I belonged here,” Pribek says. “Most of my colleagues have been friends, but few deserve as high a rating of ‘gentleman and scholar’ as Bill Hyde.” Yvonne Hyde joined the campus library staff in 1957, doing various jobs before settling into cataloging for the last 18 years of her 38-year stint running through 1995. After retiring, she volunteered a couple of hours a day for about a year. Professor Emeritus of English Carla Graham recalls both Bill and Yvonne having a tremendous wit. “As a composition professor, Bill enjoyed student word-usage, such as one who saw a long line of ‘tankard’ cars on the railroad south of La Crosse,” says Graham.