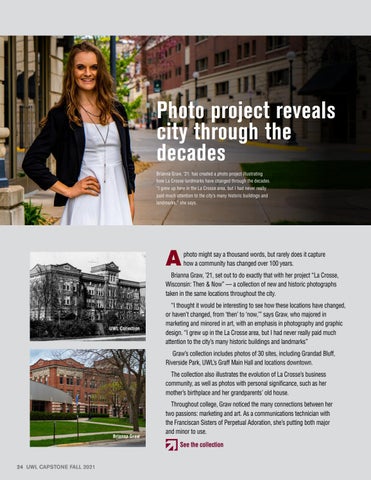 photo might say a thousand words, but rarely does it capture how a community has changed over 100 years.

Brianna Graw, ’21, set out to do exactly that with her project “La Crosse, Wisconsin: Then &amp; Now” — a collection of new and historic photographs taken in the same locations throughout the city.

“I thought it would be interesting to see how these locations have changed, or haven’t changed, from ‘then’ to ‘now,’” says Graw, who majored in marketing and minored in art, with an emphasis in photography and graphic design. “I grew up in the La Crosse area, but I had never really paid much attention to the city’s many historic buildings and landmarks” Graw’s collection includes photos of 30 sites, including Grandad Bluff, Riverside Park, UWL’s Graff Main Hall and locations downtown. The collection also illustrates the evolution of La Crosse’s business community, as well as photos with personal significance, such as her mother’s birthplace and her grandparents’ old house.

Throughout college, Graw noticed the many connections between her two passions: marketing and art. As a communications technician with the Franciscan Sisters of Perpetual Adoration, she’s putting both major and minor to use. See the collection