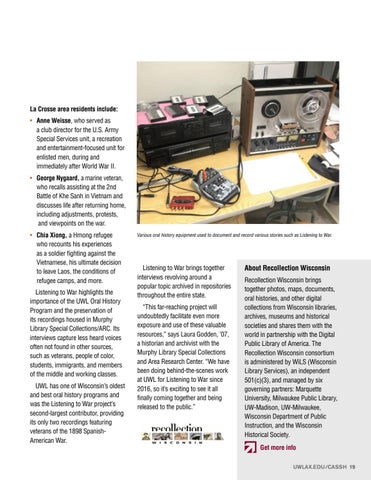 La Crosse area residents include: • Anne Weisse, who served as a club director for the U.S. Army Special Services unit, a recreation and entertainment-focused unit for enlisted men, during and immediately after World War II. • George Nygaard, a marine veteran, who recalls assisting at the 2nd Battle of Khe Sanh in Vietnam and discusses life after returning home, including adjustments, protests, and viewpoints on the war. • Chia Xiong, a Hmong refugee who recounts his experiences as a soldier fighting against the Vietnamese, his ultimate decision to leave Laos, the conditions of refugee camps, and more. Listening to War highlights the importance of the UWL Oral History Program and the preservation of its recordings housed in Murphy Library Special Collections/ARC. Its interviews capture less heard voices often not found in other sources, such as veterans, people of color, students, immigrants, and members of the middle and working classes. UWL has one of Wisconsin’s oldest and best oral history programs and was the Listening to War project’s second-largest contributor, providing its only two recordings featuring veterans of the 1898 SpanishAmerican War.

Various oral history equipment used to document and record various stories such as Listening to War.

Listening to War brings together interviews revolving around a popular topic archived in repositories throughout the entire state. “This far-reaching project will undoubtedly facilitate even more exposure and use of these valuable resources,” says Laura Godden, ’07, a historian and archivist with the Murphy Library Special Collections and Area Research Center. “We have been doing behind-the-scenes work at UWL for Listening to War since 2016, so it’s exciting to see it all finally coming together and being released to the public.”