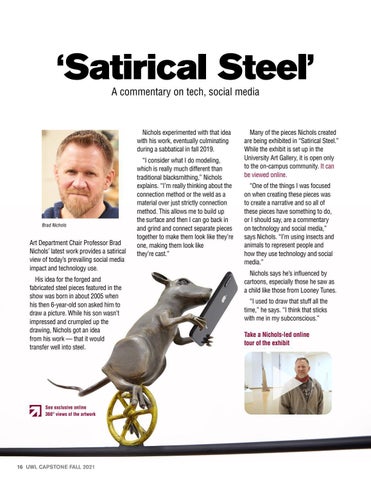 Nichols experimented with that idea with his work, eventually culminating during a sabbatical in fall 2019.

“I consider what I do modeling, which is really much different than traditional blacksmithing,” Nichols explains. “I’m really thinking about the connection method or the weld as a material over just strictly connection method. This allows me to build up the surface and then I can go back in and grind and connect separate pieces together to make them look like they’re one, making them look like they’re cast.”

His idea for the forged and fabricated steel pieces featured in the show was born in about 2005 when his then 6-year-old son asked him to draw a picture. While his son wasn’t impressed and crumpled up the drawing, Nichols got an idea from his work — that it would transfer well into steel.

Many of the pieces Nichols created are being exhibited in “Satirical Steel.” While the exhibit is set up in the University Art Gallery, it is open only to the on-campus community. It can be viewed online. “One of the things I was focused on when creating these pieces was to create a narrative and so all of these pieces have something to do, or I should say, are a commentary on technology and social media,” says Nichols. “I’m using insects and animals to represent people and how they use technology and social media.” Nichols says he’s influenced by cartoons, especially those he saw as a child like those from Looney Tunes. “I used to draw that stuff all the time,” he says. “I think that sticks with me in my subconscious.” Take a Nichols-led online tour of the exhibit