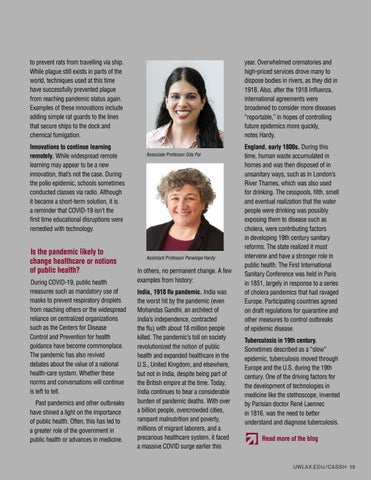 to prevent rats from travelling via ship. While plague still exists in parts of the world, techniques used at this time have successfully prevented plague from reaching pandemic status again. Examples of these innovations include adding simple rat guards to the lines that secure ships to the dock and chemical fumigation. Innovations to continue learning remotely. While widespread remote learning may appear to be a new innovation, that’s not the case. During the polio epidemic, schools sometimes conducted classes via radio. Although it became a short-term solution, it is a reminder that COVID-19 isn’t the first time educational disruptions were remedied with technology.

Is the pandemic likely to change healthcare or notions of public health? During COVID-19, public health measures such as mandatory use of masks to prevent respiratory droplets from reaching others or the widespread reliance on centralized organizations such as the Centers for Disease Control and Prevention for health guidance have become commonplace. The pandemic has also revived debates about the value of a national health-care system. Whether these norms and conversations will continue is left to tell. Past pandemics and other outbreaks have shined a light on the importance of public health. Often, this has led to a greater role of the government in public health or advances in medicine.

year. Overwhelmed crematories and high-priced services drove many to dispose bodies in rivers, as they did in 1918. Also, after the 1918 Influenza, international agreements were broadened to consider more diseases “reportable,” in hopes of controlling future epidemics more quickly, notes Hardy. Associate Professor Gita Pai

In others, no permanent change. A few examples from history: India, 1918 flu pandemic. India was the worst hit by the pandemic (even Mohandas Gandhi, an architect of India’s independence, contracted the flu) with about 18 million people killed. The pandemic’s toll on society revolutionized the notion of public health and expanded healthcare in the U.S., United Kingdom, and elsewhere, but not in India, despite being part of the British empire at the time. Today, India continues to bear a considerable burden of pandemic deaths. With over a billion people, overcrowded cities, rampant malnutrition and poverty, millions of migrant laborers, and a precarious healthcare system, it faced a massive COVID surge earlier this

England, early 1800s. During this time, human waste accumulated in homes and was then disposed of in unsanitary ways, such as in London’s River Thames, which was also used for drinking. The cesspools, filth, smell and eventual realization that the water people were drinking was possibly exposing them to disease such as cholera, were contributing factors in developing 19th century sanitary reforms. The state realized it must intervene and have a stronger role in public health. The First International Sanitary Conference was held in Paris in 1851, largely in response to a series of cholera pandemics that had ravaged Europe. Participating countries agreed on draft regulations for quarantine and other measures to control outbreaks of epidemic disease. Tuberculosis in 19th century. Sometimes described as a “slow” epidemic, tuberculosis moved through Europe and the U.S. during the 19th century. One of the driving factors for the development of technologies in medicine like the stethoscope, invented by Parisian doctor René Laennec in 1816, was the need to better understand and diagnose tuberculosis. Read more of the blog