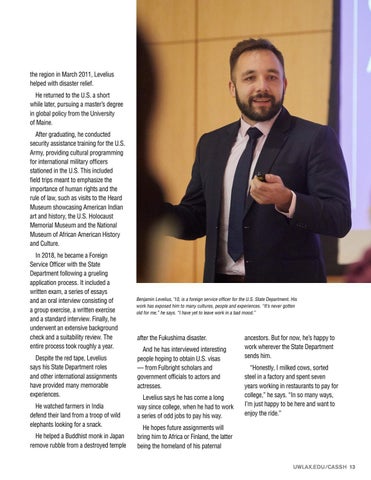 the region in March 2011, Levelius helped with disaster relief. He returned to the U.S. a short while later, pursuing a master’s degree in global policy from the University of Maine. After graduating, he conducted security assistance training for the U.S. Army, providing cultural programming for international military officers stationed in the U.S. This included field trips meant to emphasize the importance of human rights and the rule of law, such as visits to the Heard Museum showcasing American Indian art and history, the U.S. Holocaust Memorial Museum and the National Museum of African American History and Culture. In 2018, he became a Foreign Service Officer with the State Department following a grueling application process. It included a written exam, a series of essays and an oral interview consisting of a group exercise, a written exercise and a standard interview. Finally, he underwent an extensive background check and a suitability review. The entire process took roughly a year. Despite the red tape, Levelius says his State Department roles and other international assignments have provided many memorable experiences. He watched farmers in India defend their land from a troop of wild elephants looking for a snack. He helped a Buddhist monk in Japan remove rubble from a destroyed temple

Benjamin Levelius, ’10, is a foreign service officer for the U.S. State Department. His work has exposed him to many cultures, people and experiences. “It’s never gotten old for me,” he says. “I have yet to leave work in a bad mood.”

after the Fukushima disaster. And he has interviewed interesting people hoping to obtain U.S. visas — from Fulbright scholars and government officials to actors and actresses. Levelius says he has come a long way since college, when he had to work a series of odd jobs to pay his way.

ancestors. But for now, he’s happy to work wherever the State Department sends him. “Honestly, I milked cows, sorted steel in a factory and spent seven years working in restaurants to pay for college,” he says. “In so many ways, I’m just happy to be here and want to enjoy the ride.”

He hopes future assignments will bring him to Africa or Finland, the latter being the homeland of his paternal UWLAX.EDU/CASSH 13