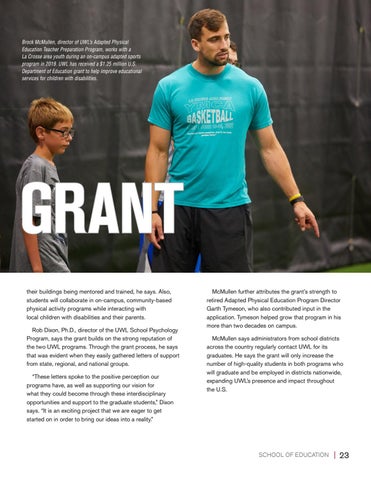 GRANT their buildings being mentored and trained, he says. Also, students will collaborate in on-campus, community-based physical activity programs while interacting with local children with disabilities and their parents. Rob Dixon, Ph.D., director of the UWL School Psychology Program, says the grant builds on the strong reputation of the two UWL programs. Through the grant process, he says that was evident when they easily gathered letters of support from state, regional, and national groups. “These letters spoke to the positive perception our programs have, as well as supporting our vision for what they could become through these interdisciplinary opportunities and support to the graduate students,” Dixon says. “It is an exciting project that we are eager to get started on in order to bring our ideas into a reality.”

McMullen further attributes the grant’s strength to retired Adapted Physical Education Program Director Garth Tymeson, who also contributed input in the application. Tymeson helped grow that program in his more than two decades on campus. McMullen says administrators from school districts across the country regularly contact UWL for its graduates. He says the grant will only increase the number of high-quality students in both programs who will graduate and be employed in districts nationwide, expanding UWL’s presence and impact throughout the U.S.