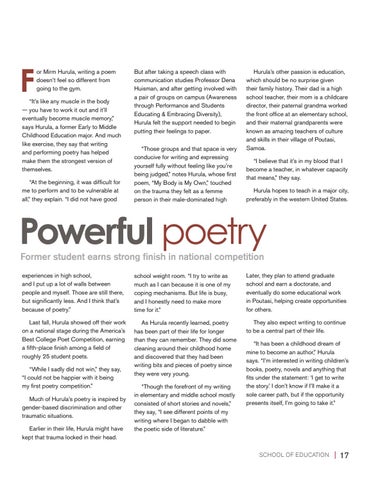 or Mirm Hurula, writing a poem doesn’t feel so different from going to the gym.

“It’s like any muscle in the body — you have to work it out and it’ll eventually become muscle memory,” says Hurula, a former Early to Middle Childhood Education major. And much like exercise, they say that writing and performing poetry has helped make them the strongest version of themselves. “At the beginning, it was difficult for me to perform and to be vulnerable at all,” they explain. “I did not have good

But after taking a speech class with communication studies Professor Dena Huisman, and after getting involved with a pair of groups on campus (Awareness through Performance and Students Educating & Embracing Diversity), Hurula felt the support needed to begin putting their feelings to paper. “Those groups and that space is very conducive for writing and expressing yourself fully without feeling like you’re being judged,” notes Hurula, whose first poem, “My Body is My Own,” touched on the trauma they felt as a femme person in their male-dominated high

Hurula’s other passion is education, which should be no surprise given their family history. Their dad is a high school teacher, their mom is a childcare director, their paternal grandma worked the front office at an elementary school, and their maternal grandparents were known as amazing teachers of culture and skills in their village of Poutasi, Samoa. “I believe that it’s in my blood that I become a teacher, in whatever capacity that means,” they say. Hurula hopes to teach in a major city, preferably in the western United States.

Powerful poetry Former student earns strong finish in national competition experiences in high school, and I put up a lot of walls between people and myself. Those are still there, but significantly less. And I think that’s because of poetry.”

school weight room. “I try to write as much as I can because it is one of my coping mechanisms. But life is busy, and I honestly need to make more time for it.”

Later, they plan to attend graduate school and earn a doctorate, and eventually do some educational work in Poutasi, helping create opportunities for others.

Last fall, Hurula showed off their work on a national stage during the America’s Best College Poet Competition, earning a fifth-place finish among a field of roughly 25 student poets.

As Hurula recently learned, poetry has been part of their life for longer than they can remember. They did some cleaning around their childhood home and discovered that they had been writing bits and pieces of poetry since they were very young.

They also expect writing to continue to be a central part of their life.

“While I sadly did not win,” they say, “I could not be happier with it being my first poetry competition.” Much of Hurula’s poetry is inspired by gender-based discrimination and other traumatic situations. Earlier in their life, Hurula might have kept that trauma locked in their head.

“Though the forefront of my writing in elementary and middle school mostly consisted of short stories and novels,” they say, “I see different points of my writing where I began to dabble with the poetic side of literature.”

“It has been a childhood dream of mine to become an author,” Hurula says. “I’m interested in writing children’s books, poetry, novels and anything that fits under the statement: ‘I get to write the story.’ I don’t know if I’ll make it a sole career path, but if the opportunity presents itself, I’m going to take it.”