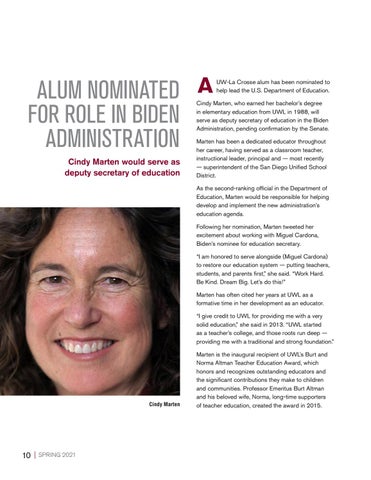 ALUM NOMINATED A FOR ROLE IN BIDEN ADMINISTRATION

UW-La Crosse alum has been nominated to help lead the U.S. Department of Education.

Cindy Marten, who earned her bachelor’s degree in elementary education from UWL in 1988, will serve as deputy secretary of education in the Biden Administration, pending confirmation by the Senate.

Cindy Marten would serve as deputy secretary of education

Marten has been a dedicated educator throughout her career, having served as a classroom teacher, instructional leader, principal and — most recently — superintendent of the San Diego Unified School District. As the second-ranking official in the Department of Education, Marten would be responsible for helping develop and implement the new administration’s education agenda. Following her nomination, Marten tweeted her excitement about working with Miguel Cardona, Biden’s nominee for education secretary. “I am honored to serve alongside (Miguel Cardona) to restore our education system — putting teachers, students, and parents first,” she said. “Work Hard. Be Kind. Dream Big. Let’s do this!” Marten has often cited her years at UWL as a formative time in her development as an educator. “I give credit to UWL for providing me with a very solid education,” she said in 2013. “UWL started as a teacher’s college, and those roots run deep — providing me with a traditional and strong foundation.”

Marten is the inaugural recipient of UWL’s Burt and Norma Altman Teacher Education Award, which honors and recognizes outstanding educators and the significant contributions they make to children and communities. Professor Emeritus Burt Altman and his beloved wife, Norma, long-time supporters of teacher education, created the award in 2015.