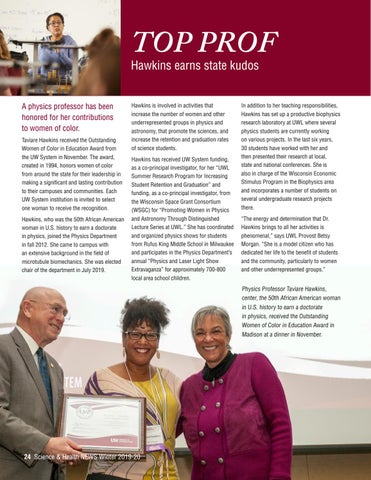 Hawkins earns state kudos A physics professor has been honored for her contributions to women of color. Taviare Hawkins received the Outstanding Women of Color in Education Award from the UW System in November. The award, created in 1994, honors women of color from around the state for their leadership in making a significant and lasting contribution to their campuses and communities. Each UW System institution is invited to select one woman to receive the recognition. Hawkins, who was the 50th African American woman in U.S. history to earn a doctorate in physics, joined the Physics Department in fall 2012. She came to campus with an extensive background in the field of microtubule biomechanics. She was elected chair of the department in July 2019.

Hawkins is involved in activities that increase the number of women and other underrepresented groups in physics and astronomy, that promote the sciences, and increase the retention and graduation rates of science students. Hawkins has received UW System funding, as a co-principal investigator, for her “UWL Summer Research Program for Increasing Student Retention and Graduation” and funding, as a co-principal investigator, from the Wisconsin Space Grant Consortium (WSGC) for “Promoting Women in Physics and Astronomy Through Distinguished Lecture Series at UWL.” She has coordinated and organized physics shows for students from Rufus King Middle School in Milwaukee and participates in the Physics Department’s annual “Physics and Laser Light Show Extravaganza” for approximately 700-800 local area school children.

In addition to her teaching responsibilities, Hawkins has set up a productive biophysics research laboratory at UWL where several physics students are currently working on various projects. In the last six years, 30 students have worked with her and then presented their research at local, state and national conferences. She is also in charge of the Wisconsin Economic Stimulus Program in the Biophysics area and incorporates a number of students on several undergraduate research projects there. “The energy and determination that Dr. Hawkins brings to all her activities is phenomenal,” says UWL Provost Betsy Morgan. “She is a model citizen who has dedicated her life to the benefit of students and the community, particularly to women and other underrepresented groups.”

Physics Professor Taviare Hawkins, center, the 50th African American woman in U.S. history to earn a doctorate in physics, received the Outstanding Women of Color in Education Award in Madison at a dinner in November.

University of Wisconsin-La Crosse Science & Health newsletter is published biannually for UWL College of Science and Health alumni and frien...

University of Wisconsin-La Crosse Science & Health newsletter is published biannually for UWL College of Science and Health alumni and frien...