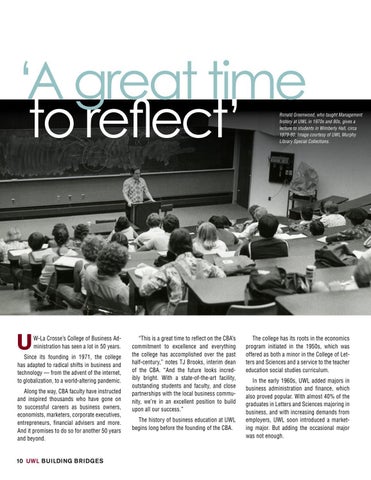 ‘A great time to reflect’

Ronald Greenwood, who taught Management history at UWL in 1970s and 80s, gives a lecture to students in Wimberly Hall, circa 1979-80. Image courtesy of UWL Murphy Library Special Collections.

W-La Crosse’s College of Business Administration has seen a lot in 50 years.

Since its founding in 1971, the college has adapted to radical shifts in business and technology — from the advent of the internet, to globalization, to a world-altering pandemic. Along the way, CBA faculty have instructed and inspired thousands who have gone on to successful careers as business owners, economists, marketers, corporate executives, entrepreneurs, financial advisers and more. And it promises to do so for another 50 years and beyond.

“This is a great time to reflect on the CBA’s commitment to excellence and everything the college has accomplished over the past half-century,” notes TJ Brooks, interim dean of the CBA. “And the future looks incredibly bright. With a state-of-the-art facility, outstanding students and faculty, and close partnerships with the local business community, we’re in an excellent position to build upon all our success.” The history of business education at UWL begins long before the founding of the CBA.

The college has its roots in the economics program initiated in the 1950s, which was offered as both a minor in the College of Letters and Sciences and a service to the teacher education social studies curriculum. In the early 1960s, UWL added majors in business administration and finance, which also proved popular. With almost 40% of the graduates in Letters and Sciences majoring in business, and with increasing demands from employers, UWL soon introduced a marketing major. But adding the occasional major was not enough.