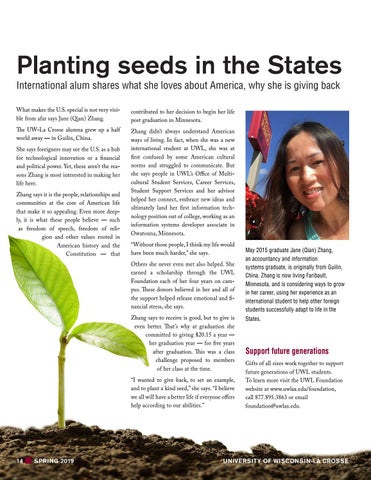 Planting seeds in the States International alum shares what she loves about America, why she is giving back What makes the U.S. special is not very visible from afar says Jane (Qian) Zhang. The UW-La Crosse alumna grew up a half world away — in Guilin, China. She says foreigners may see the U.S. as a hub for technological innovation or a financial and political power. Yet, these aren’t the reasons Zhang is most interested in making her life here. Zhang says it is the people, relationships and communities at the core of American life that make it so appealing. Even more deeply, it is what these people believe — such as freedom of speech, freedom of religion and other values rooted in American history and the Constitution — that

contributed to her decision to begin her life post graduation in Minnesota. Zhang didn’t always understand American ways of living. In fact, when she was a new international student at UWL, she was at first confused by some American cultural norms and struggled to communicate. But she says people in UWL’s Office of Multicultural Student Services, Career Services, Student Support Services and her advisor helped her connect, embrace new ideas and ultimately land her first information technology position out of college, working as an information systems developer associate in Owatonna, Minnesota. “Without those people, I think my life would have been much harder,” she says. Others she never even met also helped. She earned a scholarship through the UWL Foundation each of her four years on campus. These donors believed in her and all of the support helped release emotional and financial stress, she says. Zhang says to receive is good, but to give is even better. That’s why at graduation she committed to giving $20.15 a year — her graduation year — for five years after graduation. This was a class challenge proposed to members of her class at the time. “I wanted to give back, to set an example, and to plant a kind seed,” she says. “I believe we all will have a better life if everyone offers help according to our abilities.”

May 2015 graduate Jane (Qian) Zhang, an accountancy and information systems graduate, is originally from Guilin, China. Zhang is now living Faribault, Minnesota, and is considering ways to grow in her career, using her experience as an international student to help other foreign students successfully adapt to life in the States.