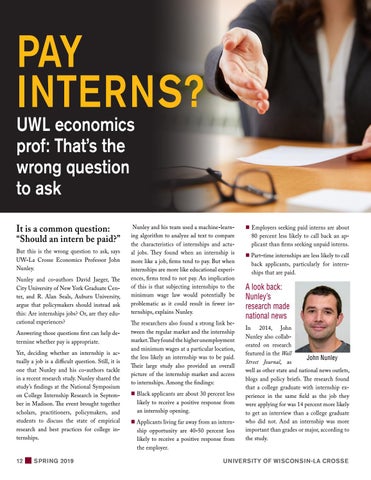 Nunley and co-authors David Jaeger, The City University of New York Graduate Center, and R. Alan Seals, Auburn University, argue that policymakers should instead ask this: Are internships jobs? Or, are they educational experiences? Answering those questions first can help determine whether pay is appropriate. Yet, deciding whether an internship is actually a job is a difficult question. Still, it is one that Nunley and his co-authors tackle in a recent research study. Nunley shared the study’s findings at the National Symposium on College Internship Research in September in Madison. The event brought together scholars, practitioners, policymakers, and students to discuss the state of empirical research and best practices for college internships. 12

Nunley and his team used a machine-learning algorithm to analyze ad text to compare the characteristics of internships and actual jobs. They found when an internship is more like a job, firms tend to pay. But when internships are more like educational experiences, firms tend to not pay. An implication of this is that subjecting internships to the minimum wage law would potentially be problematic as it could result in fewer internships, explains Nunley. The researchers also found a strong link between the regular market and the internship market. They found the higher unemployment and minimum wages at a particular location, the less likely an internship was to be paid. Their large study also provided an overall picture of the internship market and access to internships. Among the findings: n Black applicants are about 30 percent less likely to receive a positive response from an internship opening. n Applicants living far away from an internship opportunity are 40-50 percent less likely to receive a positive response from the employer.

A look back: Nunley’s research made national news In 2014, John Nunley also collaborated on research featured in the Wall John Nunley Street Journal, as well as other state and national news outlets, blogs and policy briefs. The research found that a college graduate with internship experience in the same field as the job they were applying for was 14 percent more likely to get an interview than a college graduate who did not. And an internship was more important than grades or major, according to the study.