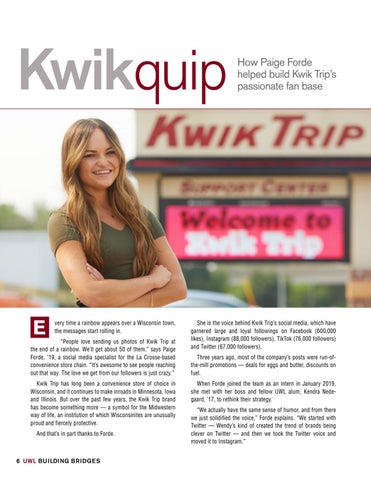 very time a rainbow appears over a Wisconsin town, the messages start rolling in.

“People love sending us photos of Kwik Trip at the end of a rainbow. We’ll get about 50 of them,” says Paige Forde, ’19, a social media specialist for the La Crosse-based convenience store chain. “It’s awesome to see people reaching out that way. The love we get from our followers is just crazy.” Kwik Trip has long been a convenience store of choice in Wisconsin, and it continues to make inroads in Minnesota, Iowa and Illinois. But over the past few years, the Kwik Trip brand has become something more — a symbol for the Midwestern way of life, an institution of which Wisconsinites are unusually proud and fiercely protective. And that’s in part thanks to Forde.

She is the voice behind Kwik Trip’s social media, which have garnered large and loyal followings on Facebook (600,000 likes), Instagram (88,000 followers), TikTok (76,000 followers) and Twitter (67,000 followers). Three years ago, most of the company’s posts were run-ofthe-mill promotions — deals for eggs and butter, discounts on fuel. When Forde joined the team as an intern in January 2019, she met with her boss and fellow UWL alum, Kendra Nedegaard, ’17, to rethink their strategy. “We actually have the same sense of humor, and from there we just solidified the voice,” Forde explains. “We started with Twitter — Wendy’s kind of created the trend of brands being clever on Twitter — and then we took the Twitter voice and moved it to Instagram.”