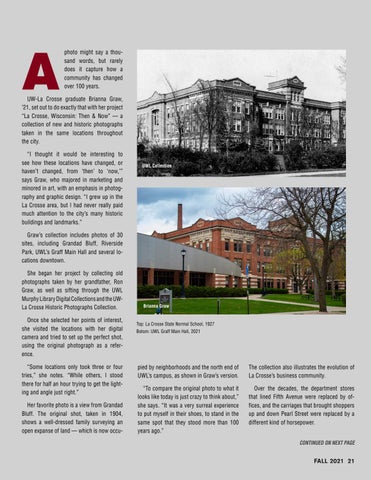 photo might say a thousand words, but rarely does it capture how a community has changed over 100 years.

UW-La Crosse graduate Brianna Graw, ’21, set out to do exactly that with her project “La Crosse, Wisconsin: Then &amp; Now” — a collection of new and historic photographs taken in the same locations throughout the city. “I thought it would be interesting to see how these locations have changed, or haven’t changed, from ‘then’ to ‘now,’” says Graw, who majored in marketing and minored in art, with an emphasis in photography and graphic design. “I grew up in the La Crosse area, but I had never really paid much attention to the city’s many historic buildings and landmarks.”

Graw’s collection includes photos of 30 sites, including Grandad Bluff, Riverside Park, UWL’s Graff Main Hall and several locations downtown. She began her project by collecting old photographs taken by her grandfather, Ron Graw, as well as sifting through the UWL Murphy Library Digital Collections and the UWLa Crosse Historic Photographs Collection. Once she selected her points of interest, she visited the locations with her digital camera and tried to set up the perfect shot, using the original photograph as a reference. “Some locations only took three or four tries,” she notes. “While others, I stood there for half an hour trying to get the lighting and angle just right.” Her favorite photo is a view from Grandad Bluff. The original shot, taken in 1904, shows a well-dressed family surveying an open expanse of land — which is now occu-

pied by neighborhoods and the north end of UWL’s campus, as shown in Graw’s version.

“To compare the original photo to what it looks like today is just crazy to think about,” she says. “It was a very surreal experience to put myself in their shoes, to stand in the same spot that they stood more than 100 years ago.”

Over the decades, the department stores that lined Fifth Avenue were replaced by offices, and the carriages that brought shoppers up and down Pearl Street were replaced by a different kind of horsepower. CONTINUED ON NEXT PAGE