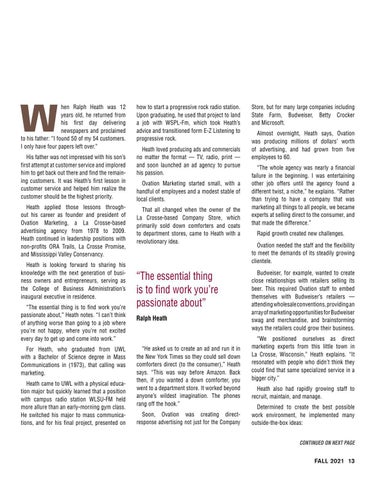 hen Ralph Heath was 12 years old, he returned from his first day delivering newspapers and proclaimed to his father: “I found 50 of my 54 customers. I only have four papers left over.” His father was not impressed with his son’s first attempt at customer service and implored him to get back out there and find the remaining customers. It was Heath’s first lesson in customer service and helped him realize the customer should be the highest priority. Heath applied those lessons throughout his career as founder and president of Ovation Marketing, a La Crosse-based advertising agency from 1978 to 2009. Heath continued in leadership positions with non-profits ORA Trails, La Crosse Promise, and Mississippi Valley Conservancy. Heath is looking forward to sharing his knowledge with the next generation of business owners and entrepreneurs, serving as the College of Business Administration’s inaugural executive in residence. “The essential thing is to find work you’re passionate about,” Heath notes. “I can’t think of anything worse than going to a job where you’re not happy, where you’re not excited every day to get up and come into work.” For Heath, who graduated from UWL with a Bachelor of Science degree in Mass Communications in (1973), that calling was marketing. Heath came to UWL with a physical education major but quickly learned that a position with campus radio station WLSU-FM held more allure than an early-morning gym class. He switched his major to mass communications, and for his final project, presented on

how to start a progressive rock radio station. Upon graduating, he used that project to land a job with WSPL-Fm, which took Heath’s advice and transitioned form E-Z Listening to progressive rock. Heath loved producing ads and commercials no matter the format — TV, radio, print — and soon launched an ad agency to pursue his passion. Ovation Marketing started small, with a handful of employees and a modest stable of local clients. That all changed when the owner of the La Crosse-based Company Store, which primarily sold down comforters and coats to department stores, came to Heath with a revolutionary idea.

“He asked us to create an ad and run it in the New York Times so they could sell down comforters direct (to the consumer),” Heath says. “This was way before Amazon. Back then, if you wanted a down comforter, you went to a department store. It worked beyond anyone’s wildest imagination. The phones rang off the hook.” Soon, Ovation was creating directresponse advertising not just for the Company

Store, but for many large companies including State Farm, Budweiser, Betty Crocker and Microsoft. Almost overnight, Heath says, Ovation was producing millions of dollars’ worth of advertising, and had grown from five employees to 60. “The whole agency was nearly a financial failure in the beginning. I was entertaining other job offers until the agency found a different twist, a niche,” he explains. “Rather than trying to have a company that was marketing all things to all people, we became experts at selling direct to the consumer, and that made the difference.” Rapid growth created new challenges. Ovation needed the staff and the flexibility to meet the demands of its steadily growing clientele. Budweiser, for example, wanted to create close relationships with retailers selling its beer. This required Ovation staff to embed themselves with Budweiser’s retailers — attending wholesale conventions, providing an array of marketing opportunities for Budweiser swag and merchandise, and brainstorming ways the retailers could grow their business. “We positioned ourselves as direct marketing experts from this little town in La Crosse, Wisconsin,” Heath explains. “It resonated with people who didn’t think they could find that same specialized service in a bigger city.” Heath also had rapidly growing staff to recruit, maintain, and manage. Determined to create the best possible work environment, he implemented many outside-the-box ideas: CONTINUED ON NEXT PAGE