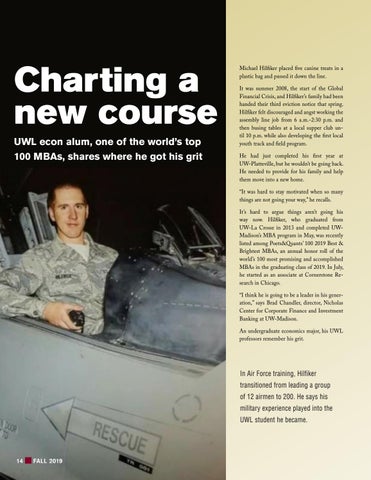 Charting a new course UWL econ alum, one of the world’s top 100 MBAs, shares where he got his grit

Michael Hilfiker placed five canine treats in a plastic bag and passed it down the line. It was summer 2008, the start of the Global Financial Crisis, and Hilfiker’s family had been handed their third eviction notice that spring. Hilfiker felt discouraged and angst working the assembly line job from 6 a.m.-2:30 p.m. and then busing tables at a local supper club until 10 p.m. while also developing the first local youth track and field program. He had just completed his first year at UW-Platteville, but he wouldn’t be going back. He needed to provide for his family and help them move into a new home. “It was hard to stay motivated when so many things are not going your way,” he recalls. It’s hard to argue things aren’t going his way now. Hilfiker, who graduated from UW-La Crosse in 2013 and completed UWMadison’s MBA program in May, was recently listed among Poets&amp;Quants’ 100 2019 Best &amp; Brightest MBAs, an annual honor roll of the world’s 100 most promising and accomplished MBAs in the graduating class of 2019. In July, he started as an associate at Cornerstone Research in Chicago. “I think he is going to be a leader in his generation,” says Brad Chandler, director, Nicholas Center for Corporate Finance and Investment Banking at UW-Madison. An undergraduate economics major, his UWL professors remember his grit.

In Air Force training, Hilfiker transitioned from leading a group of 12 airmen to 200. He says his military experience played into the UWL student he became.