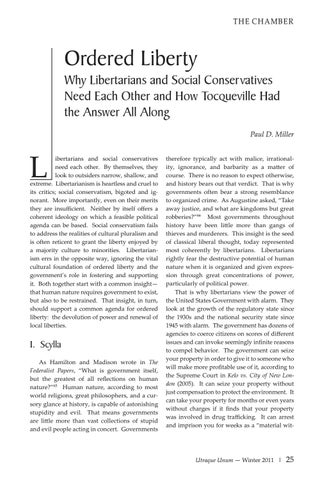 Ordered Liberty Why Libertarians and Social Conservatives Need Each Other and How Tocqueville Had the Answer All Along Paul D. Miller

ibertarians and social conservatives need each other. By themselves, they look to outsiders narrow, shallow, and extreme. Libertarianism is heartless and cruel to its critics; social conservatism, bigoted and ignorant. More importantly, even on their merits they are insufficient. Neither by itself offers a coherent ideology on which a feasible political agenda can be based. Social conservatism fails to address the realities of cultural pluralism and is often reticent to grant the liberty enjoyed by a majority culture to minorities. Libertarianism errs in the opposite way, ignoring the vital cultural foundation of ordered liberty and the government’s role in fostering and supporting it. Both together start with a common insight— that human nature requires government to exist, but also to be restrained. That insight, in turn, should support a common agenda for ordered liberty: the devolution of power and renewal of local liberties.

I. Scylla As Hamilton and Madison wrote in The Federalist Papers, “What is government itself, but the greatest of all reflections on human nature?”65 Human nature, according to most world religions, great philosophers, and a cursory glance at history, is capable of astonishing stupidity and evil. That means governments are little more than vast collections of stupid and evil people acting in concert. Governments

therefore typically act with malice, irrationality, ignorance, and barbarity as a matter of course. There is no reason to expect otherwise, and history bears out that verdict. That is why governments often bear a strong resemblance to organized crime. As Augustine asked, “Take away justice, and what are kingdoms but great robberies?”66 Most governments throughout history have been little more than gangs of thieves and murderers. This insight is the seed of classical liberal thought, today represented most coherently by libertarians. Libertarians rightly fear the destructive potential of human nature when it is organized and given expression through great concentrations of power, particularly of political power. That is why libertarians view the power of the United States Government with alarm. They look at the growth of the regulatory state since the 1930s and the national security state since 1945 with alarm. The government has dozens of agencies to coerce citizens on scores of different issues and can invoke seemingly infinite reasons to compel behavior. The government can seize your property in order to give it to someone who will make more profitable use of it, according to the Supreme Court in Kelo vs. City of New London (2005). It can seize your property without just compensation to protect the environment. It can take your property for months or even years without charges if it finds that your property was involved in drug trafficking. It can arrest and imprison you for weeks as a “material wit-