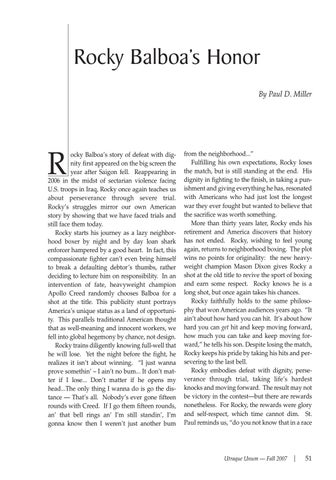 ocky Balboa’s story of defeat with dignity first appeared on the big screen the year after Saigon fell. Reappearing in 2006 in the midst of sectarian violence facing U.S. troops in Iraq, Rocky once again teaches us about perseverance through severe trial. Rocky’s struggles mirror our own American story by showing that we have faced trials and still face them today. Rocky starts his journey as a lazy neighborhood boxer by night and by day loan shark enforcer hampered by a good heart. In fact, this compassionate fighter can’t even bring himself to break a defaulting debtor’s thumbs, rather deciding to lecture him on responsibility. In an intervention of fate, heavyweight champion Apollo Creed randomly chooses Balboa for a shot at the title. This publicity stunt portrays America’s unique status as a land of opportunity. This parallels traditional American thought that as well-meaning and innocent workers, we fell into global hegemony by chance, not design. Rocky trains diligently knowing full-well that he will lose. Yet the night before the fight, he realizes it isn’t about winning. “I just wanna prove somethin’ – I ain’t no bum... It don’t matter if I lose... Don’t matter if he opens my head...The only thing I wanna do is go the distance — That’s all. Nobody’s ever gone fifteen rounds with Creed. If I go them fifteen rounds, an’ that bell rings an’ I’m still standin’, I’m gonna know then I weren’t just another bum

from the neighborhood...” Fulfilling his own expectations, Rocky loses the match, but is still standing at the end. His dignity in fighting to the finish, in taking a punishment and giving everything he has, resonated with Americans who had just lost the longest war they ever fought but wanted to believe that the sacrifice was worth something. More than thirty years later, Rocky ends his retirement and America discovers that history has not ended. Rocky, wishing to feel young again, returns to neighborhood boxing. The plot wins no points for originality: the new heavyweight champion Mason Dixon gives Rocky a shot at the old title to revive the sport of boxing and earn some respect. Rocky knows he is a long shot, but once again takes his chances. Rocky faithfully holds to the same philosophy that won American audiences years ago. “It ain’t about how hard you can hit. It’s about how hard you can get hit and keep moving forward, how much you can take and keep moving forward,” he tells his son. Despite losing the match, Rocky keeps his pride by taking his hits and persevering to the last bell. Rocky embodies defeat with dignity, perseverance through trial, taking life’s hardest knocks and moving forward. The result may not be victory in the contest—but there are rewards nonetheless. For Rocky, the rewards were glory and self-respect, which time cannot dim. St. Paul reminds us, “do you not know that in a race