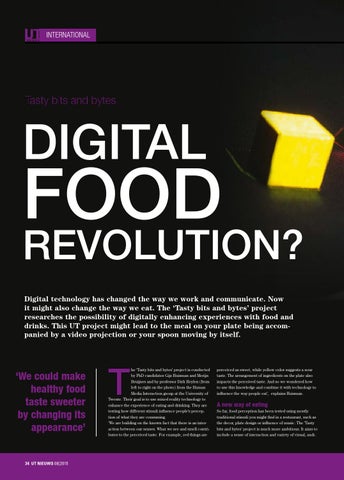 REVOLUTION? Digital technology has changed the way we work and communicate. Now it might also change the way we eat. The ‘Tasty bits and bytes’ project researches the possibility of digitally enhancing experiences with food and drinks. This UT project might lead to the meal on your plate being accompanied by a video projection or your spoon moving by itself.

he ‘Tasty bits and bytes’ project is conducted by PhD candidates Gijs Huisman and Merijn Bruijnes and by professor Dirk Heylen (from left to right on the photo) from the Human Media Interaction group at the University of Twente. Their goal is to use mixed reality technology to enhance the experience of eating and drinking. They are testing how different stimuli influence people’s perception of what they are consuming. ‘We are building on the known fact that there is an interaction between our senses. What we see and smell contributes to the perceived taste. For example, red things are

perceived as sweet, while yellow color suggests a sour taste. The arrangement of ingredients on the plate also impacts the perceived taste. And so we wondered how to use this knowledge and combine it with technology to influence the way people eat’, explains Huisman.

A new way of eating So far, food perception has been tested using mostly traditional stimuli you might find in a restaurant, such as the decor, plate design or influence of music. The ‘Tasty bits and bytes’ project is much more ambitious. It aims to include a sense of interaction and variety of visual, audi-