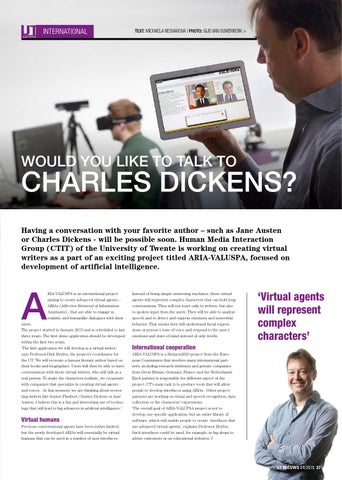 CHARLES DICKENS? Having a conversation with your favorite author – such as Jane Austen or Charles Dickens - will be possible soon. Human Media Interaction Group (CTIT) of the University of Twente is working on creating virtual writers as a part of an exciting project titled ARIA-VALUSPA, focused on development of artificial intelligence.

users. The project started in January 2015 and is scheduled to last three years. The first demo application should be developed within the first two years. ‘The first application we will develop is a virtual writer,’ says Professor Dirk Heylen, the project’s coordinator for the UT. ‘We will recreate a famous literary author based on their books and biographies. Users will then be able to have conversations with these virtual writers, who will talk as a real person. To make the characters realistic, we cooperate with companies that specialize in creating virtual agents and voices. At this moment, we are thinking about recreating writers like Gustav Flaubert, Charles Dickens or Jane Austen. I believe this is a fun and interesting use of technology that will lead to big advances in artificial intelligence.’

Virtual humans Previous conversational agents have been rather limited, but the newly developed ARIAs will essentially be virtual humans that can be used in a number of user interfaces.

Instead of being simple answering machines, these virtual agents will represent complex characters that can hold long conversations. They will not react only to written, but also to spoken input from the users. They will be able to analyze speech and to detect and express emotions and nonverbal behavior. That means they will understand facial expressions or person´s tone of voice and respond to the user´s emotions and state of mind instead of only words.

International cooperation ARIA-VALUSPA is a Horizon2020 project from the European Commission that involves many international partners, including research institutes and private companies from Great Britain, Germany, France and the Netherlands. Each partner is responsible for different aspect of the project. UT’s main task is to produce tools that will allow people to develop interfaces using ARIAs. Other project partners are working on visual and speech recognition, data collection or the characters’ expressions. ‘The overall goal of ARIA-VALUPSA project is not to develop one specific application, but an entire library of software, which will enable people to create interfaces that use advanced virtual agents,’ explains Professor Heylen. Such interfaces could be used, for example, in big shops to advise customers or on educational websites. |