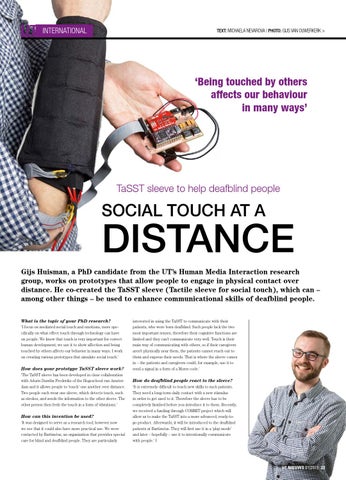 ‘Being touched by others affects our behaviour in many ways’

SOCIAL TOUCH AT A

DISTANCE Gijs Huisman, a PhD candidate from the UT’s Human Media Interaction research group, works on prototypes that allow people to engage in physical contact over distance. He co-created the TaSST sleeve (Tactile sleeve for social touch), which can – among other things – be used to enhance communicational skills of deafblind people. What is the topic of your PhD research? ‘I focus on mediated social touch and emotions, more specifically on what effect touch through technology can have on people. We know that touch is very important for correct human development; we use it to show affection and being touched by others affects our behavior in many ways. I work on creating various prototypes that simulate social touch.’

How does your prototype TaSST sleeve work? ‘The TaSST sleeve has been developed in close collaboration with Aduén Darriba Frederiks of the Hogeschool van Amsterdam and it allows people to ‘touch’ one another over distance. Two people each wear one sleeve, which detects touch, such as strokes, and sends the information to the other sleeve. The other person then feels the touch in a form of vibrations.’

How can this invention be used? ‘It was designed to serve as a research tool; however now we see that it could also have more practical use. We were contacted by Bartiméus, an organization that provides special care for blind and deafblind people. They are particularly

interested in using the TaSST to communicate with their patients, who were born deafblind. Such people lack the two most important senses, therefore their cognitive functions are limited and they can’t communicate very well. Touch is their main way of communicating with others, so if their caregivers aren’t physically near them, the patients cannot reach out to them and express their needs. That is where the sleeve comes in – the patients and caregivers could, for example, use it to send a signal in a form of a Morse code.’

How do deafblind people react to the sleeve? ‘It is extremely difficult to teach new skills to such patients. They need a long-term daily contact with a new stimulus in order to get used to it. Therefore the sleeve has to be completely finished before you introduce it to them. Recently, we received a funding through COMMIT project which will allow us to make the TaSST into a more advanced, ready-togo product. Afterwards, it will be introduced to the deafblind patients at Bartiméus. They will first use it in a ‘play-mode’ and later – hopefully – use it to intentionally communicate with people.’ |