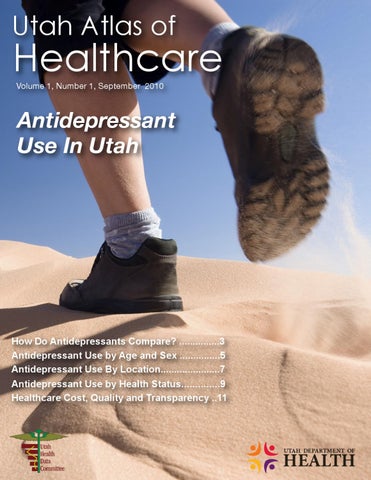 Overview Depression and Antidepressant Use in Utah Depression is recognized as a significant public health concern.

It has been estimated that as many as one in eight Americans nationwide will experience an episode of depression requiring treatment.(1-2) According to the Council on Scientific Affairs of the American Medical Association, up to four percent of people at any one time suffer from depression.(3) The following report describes the extent and dimensions of this public health issue in Utah. Depression is a common illness characterized by a variety of potentially debilitating symptoms. These symptoms may include: • • • • • • • •

Loss of interest in important activities, friendships, and family Decreased energy and increased levels of fatigue Disturbances in cognitive functioning including difficulty concentrating, making decisions, and organizing one’s thoughts Disturbances in one’s mood such as increased irritability and restlessness Sleep and appetite disturbances Persistent and overwhelming feelings of sadness and anxiety Feelings of worthlessness, helplessness and/or hopelessness Thoughts of suicide and suicide attempts(4)

With so many potentially devastating symptoms it is easy to see how depression can negatively impact one’s life. Earlier research has estimated that nearly 80% of people with depression experience difficulties maintaining their marriage, family, and social relationships and experience difficulties at work and school.(5) Researchers have estimated that the impact of depression on one’s quality of living and daily functioning matches that of heart disease and actually exceeds that of diabetes and arthritis.(6-7) In addition to personal and family distress, the functional impairment caused by depression results in billions of dollars of direct and indirect healthcare costs, decreased workplace productivity and increased absenteeism.(5-6) The prevalence of depression, in addition to the emergence of a new class of effective and safer antidepressant medications, has contributed to antidepressants becoming one of the most widely prescribed medications in the United States and Utah. Evaluating antidepressant use in Utah provides a unique opportunity to better understand the demographics, real costs and impact of depression. For this report commercial health insurance claims from 899,323 Utah residents were examined for antidepressant use. In all, more than six million pharmacy claims from 2009 were reviewed, representing nearly $277 million in total pharmaceutical expenditures. From these claims more than 84,000 people were prescribed antidepressants. More than a half a million insurance claims were submitted for antidepressant medications, representing more than $19 million dollars in expenditures for antidepressant medications. This report looks at how antidepressant use compares to other medications. In addition, this report looks at antidepressant use by age, sex, geographic location, and the health status of the Utah healthcare consumer. This report is intended to serve as a foundation for greater dialogue between healthcare consumers, healthcare providers, policy makers, researchers and public health professionals. This report and those to follow will support dialogue based upon a foundation of sound empirical data.

Findings How Do Antidepressants Compare? Antidepressants are one of the most widely prescribed medications in the United States and Utah. To better grasp the magnitude of antidepressant use in Utah, utilization characteristics among the top ten most prescribed drug classifications are compared.

Findings How Do Antidepressants Compare? - Continued Percent of Total Dollars Spent on Pharmaceuticals Among Females Ages 18-64 by Therapeutic Classification Different prescription use patterns emerge when the percentage of dollars spent on pharmaceuticals is viewed by sex of the healthcare consumer. The cost of antidepressants prescribed to females ages 18-64* ranked first among the top ten - amounting to just over 10% of the total dollars spent on pharmaceuticals for females in 2009.

* Antidepressant use among persons birth to seventeen years old are excluded from many of these analyses as antidepressant use with children is a topic of discussion and debate among regulatory agencies, healthcare providers and researchers. Data for people sixty-five years old and older are currently not available.

Findings Antidepressant Use by Age and Sex

* These ranking were drawn from commercial healthcare claims and do not contain data from Medicaid pharmacy claims. Statewide rankings may change when Medicaid data are merged with the commercial claims data.

Further examination of antidepressant utilization patterns and health status of healthcare consumers is required to better define the relationships between chronic diseases, depression and antidepressant use. Further analysis would assist in answering important questions such as “To what degree does depression impact the cost of treating and the progression of other common chronic diseases?” Further analysis might also be helpful in better understanding disease onset - answering the question, “What comes first, the chronic disease(s) or depression and how does each effect the other?” Greater understanding of these relationships might open the door to earlier, more effective and less costly treatment practices for chronic disease.

Summary Healthcare Cost, Quality, and Transparency: Putting together the pieces and moving forward Depression is a serious public health issue.

Its prevalence is widespread and the impact on individuals, families and the economy is significant. Depression has been projected to emerge as the second leading cause of disability among developed nations over the next two decades.(8) Utah does not appear to be immune to this public health issue or emerging trend. Antidepressant use can serve as a proxy for depression, aiding in the identification of prevalence, demographic characteristics, relationships to other chronic diseases and total costs of this potentially debilitating disease. A better understanding of these prevalences, demographics, relationships and costs will inform healthcare and public health professionals, policy makers, and researchers about depression and its impact on people and communities. This report presented several key findings. •

Females are prescribed antidepressants at a rate more than twice that of males.

There are distinct age variations in how antidepressants are prescribed.

Among women, there are large geographic variations in prescription rates for antidepressants across Utah.

Among men there are very little geographic variations in prescription rates for antidepressants across Utah.

About this Publication The Utah Atlas of Healthcare: Antidepressant Use in Utah is a publication of the Utah Department of Health, Health Data Committee, Office of Health Care Statistics. The findings in this publication are based upon data from the Utah All Payer Database.

About the Author: Mark Gaskill, MFT is with the Utah Department of Health, Office of Healthcare Statistics. He currently serves as the Utah All Payer Database Project Director.

Antidepressants Prescribed by Mechanism of Action

Utah Atlas of Healthcare: Antidepressant Use in Utah Vol.1 No.1, Sept 2010