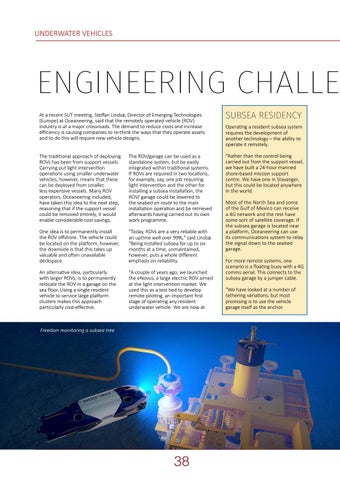 ENGINEERING CHALLE At a recent SUT meeting, Steffan Lindsø, Director of Emerging Technologies (Europe) at Oceaneering, said that the remotely operated vehicle (ROV) industry is at a major crossroads. The demand to reduce costs and increase efficiency is causing companies to re-think the ways that they operate assets and to do this will require new vehicle designs. The traditional approach of deploying ROVs has been from support vessels. Carrying out light intervention operations using smaller underwater vehicles, however, means that these can be deployed from smaller, less expensive vessels. Many ROV operators, Oceaneering included, have taken this idea to the next step, reasoning that if the support vessel could be removed entirely, it would enable considerable cost savings.

The ROV/garage can be used as a standalone system, but be easily integrated within traditional systems. If ROVs are required in two locations, for example, say, one job requiring light intervention and the other for installing a subsea installation, the ROV/ garage could be lowered to the seabed en route to the main installation operation and be retrieved afterwards having carried out its own work programme.

One idea is to permanently install the ROV offshore. The vehicle could be located on the platform, however, the downside is that this takes up valuable and often unavailable deckspace.

"Today, ROVs are a very reliable with an uptime well over 99%," said Lindsø. "Being installed subsea for up to six months at a time, unmaintained, however, puts a whole different emphasis on reliability.

An alternative idea, particularly with larger ROVs, is to permanently relocate the ROV in a garage on the sea floor. Using a single resident vehicle to service large platform clusters makes this approach particularly cost-effective.

"A couple of years ago, we launched the eNovus, a large electric ROV aimed at the light intervention market. We used this as a test bed to develop remote piloting, an important first stage of operating any resident underwater vehicle. We are now at

SUBSEA RESIDENCY Operating a resident subsea system requires the development of another technology – the ability to operate it remotely. "Rather than the control being carried out from the support vessel, we have built a 24-hour manned shore-based mission support centre. We have one in Stavanger, but this could be located anywhere in the world. Most of the North Sea and some of the Gulf of Mexico can receive a 4G network and the rest have some sort of satellite coverage. If the subsea garage is located near a platform, Oceaneering can use its communications system to relay the signal down to the seabed garage. For more remote systems, one scenario is a floating buoy with a 4G comms aerial. This connects to the subsea garage by a jumper cable. "We have looked at a number of tethering variations, but most promising is to use the vehicle garage itself as the anchor.