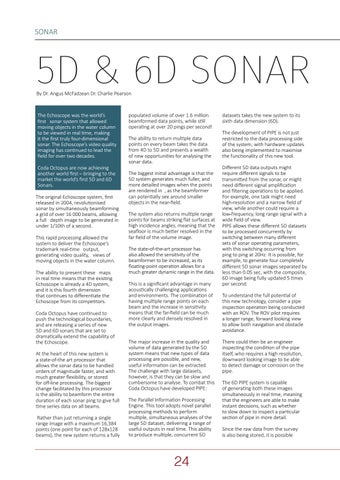 The Echoscope was the world’s first sonar system that allowed moving objects in the water column to be viewed in real time, making it the first truly four-dimensional sonar. The Echoscope’s video quality imaging has continued to lead the field for over two decades. Coda Octopus are now achieving another world first – bringing to the market the world’s first 5D and 6D Sonars. The original Echoscope system, first released in 2004, revolutionised sonar by simultaneously beamforming a grid of over 16 000 beams, allowing a full depth image to be generated in under 1/10th of a second. This rapid processing allowed the system to deliver the Echoscope’s trademark real-time output, generating video quality, views of moving objects in the water column. The ability to present these maps in real time means that the existing Echoscope is already a 4D system, and it is this fourth dimension that continues to differentiate the Echoscope from its competitors. Coda Octopus have continued to push the technological boundaries, and are releasing a series of new 5D and 6D sonars that are set to dramatically extend the capability of the Echoscope. At the heart of this new system is a state-of-the art processor that allows the sonar data to be handled orders of magnitude faster, and with much greater flexibility, or stored for off-line processing. The biggest change facilitated by this processor is the ability to beamform the entire duration of each sonar ping to give full time series data on all beams. Rather than just returning a single range image with a maximum 16,384 points (one point for each of 128x128 beams), the new system returns a fully

populated volume of over 1.6 million beamformed data points, while still operating at over 20 pings per second! The ability to return multiple data points on every beam takes the data from 4D to 5D and presents a wealth of new opportunities for analysing the sonar data. The biggest initial advantage is that the 5D system generates much fuller, and more detailed images when the points are rendered in , as the beamformer can potentially see around smaller objects in the near-field. The system also returns multiple range points for beams striking flat surfaces at high incidence angles, meaning that the seafloor is much better resolved in the far field of the volume image. The state-of-the-art processor has also allowed the sensitivity of the beamformer to be increased, as its floating-point operation allows for a much greater dynamic range in the data. This is a significant advantage in many acoustically challenging applications and environments. The combination of having multiple range points on each beam and the increase in sensitivity means that the far-field can be much more clearly and densely resolved in the output images. The major increase in the quality and volume of data generated by the 5D system means that new types of data processing are possible, and new, useful information can be extracted. The challenge with large datasets, however, is that they can be slow and cumbersome to analyse. To combat this Coda Octopus have developed PIPE: The Parallel Information Processing Engine. This tool adopts novel parallel processing methods to perform multiple, simultaneous analyses of the large 5D dataset, delivering a range of useful outputs in real time. This ability to produce multiple, concurrent 5D

datasets takes the new system to its sixth data dimension (6D). The development of PIPE is not just restricted to the data processing side of the system, with hardware updates also being implemented to maximise the functionality of this new tool. Different 5D data outputs might require different signals to be transmitted from the sonar, or might need different signal amplification and filtering operations to be applied. For example, one task might need high-resolution and a narrow field of view, while another could require a low-frequency, long range signal with a wide field of view. PIPE allows these different 5D datasets to be processed concurrently by switching between many different sets of sonar operating parameters, with this switching occurring from ping to ping at 20Hz. It is possible, for example, to generate four completely different 5D sonar images separated by less than 0.05 sec, with the composite, 6D image being fully updated 5 times per second. To understand the full potential of this new technology, consider a pipe inspection operation being conducted with an ROV. The ROV pilot requires a longer range, forward looking view to allow both navigation and obstacle avoidance. There could then be an engineer inspecting the condition of the pipe itself, who requires a high resolution, downward looking image to be able to detect damage or corrosion on the pipe. The 6D PIPE system is capable of generating both these images simultaneously in real time, meaning that the engineers are able to make instant decisions, such as whether to slow down to inspect a particular section of pipe in more detail. Since the raw data from the survey is also being stored, it is possible

UT3 is the magazine of the Society for Underwater Technology 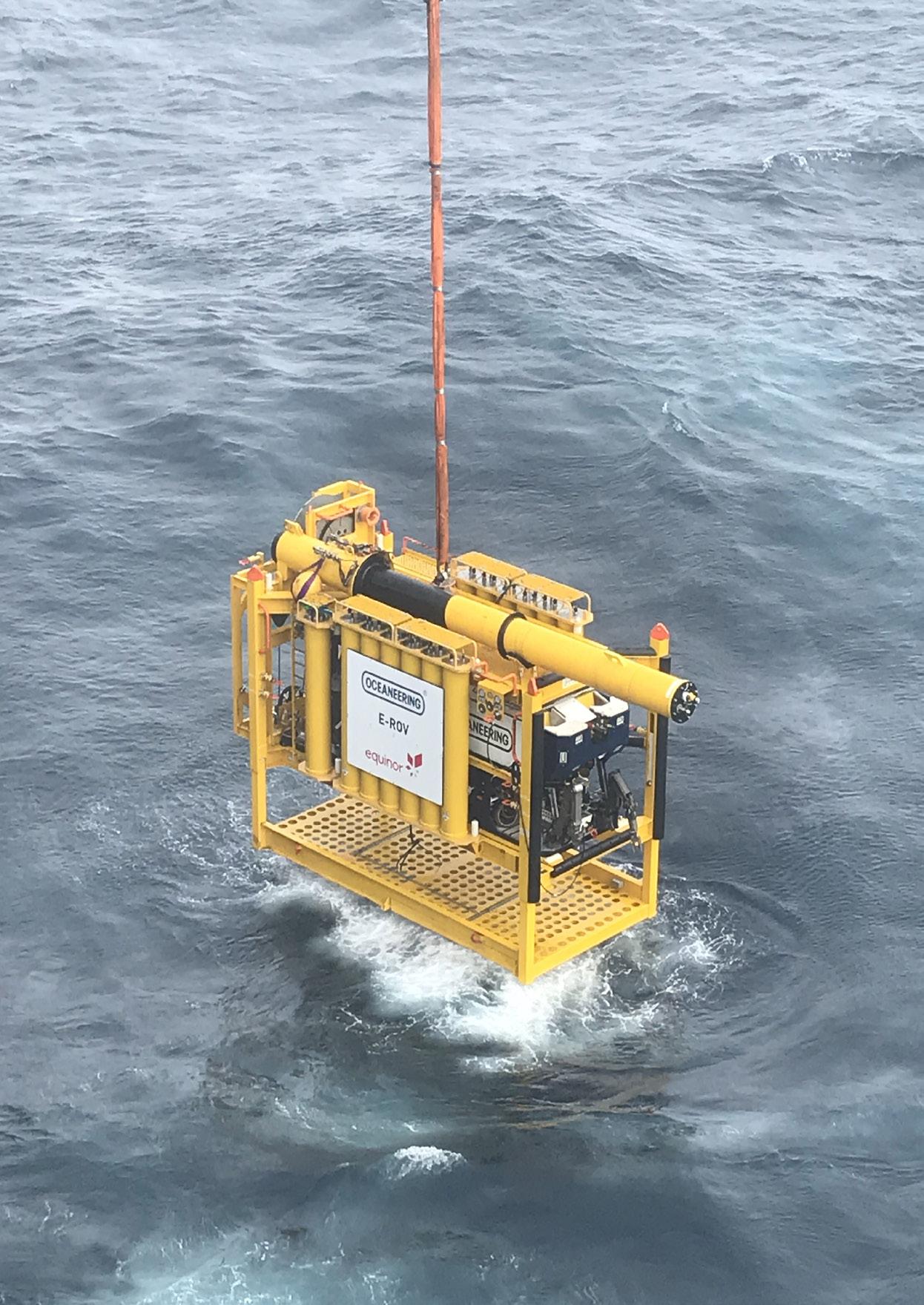