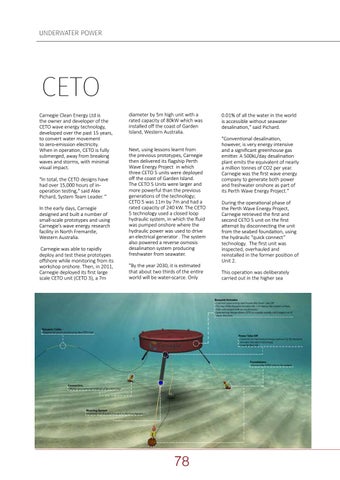 CETO Carnegie Clean Energy Ltd is the owner and developer of the CETO wave energy technology, developed over the past 15 years, to convert water movement to zero-emission electricity. When in operation, CETO is fully submerged, away from breaking waves and storms, with minimal visual impact. "In total, the CETO designs have had over 15,000 hours of inoperation testing," said Alex Pichard, System Team Leader. " In the early days, Carnegie designed and built a number of small-scale prototypes and using Carnegie’s wave energy research facility in North Fremantle, Western Australia. Carnegie was able to rapidly deploy and test these prototypes offshore while monitoring from its workshop onshore. Then, in 2011, Carnegie deployed its first large scale CETO unit (CETO 3), a 7m

diameter by 5m high unit with a rated capacity of 80kW which was installed off the coast of Garden Island, Western Australia. Next, using lessons learnt from the previous prototypes, Carnegie then delivered its flagship Perth Wave Energy Project in which three CETO 5 units were deployed off the coast of Garden Island. The CETO 5 Units were larger and more powerful than the previous generations of the technology; CETO 5 was 11m by 7m and had a rated capacity of 240 kW. The CETO 5 technology used a closed loop hydraulic system, in which the fluid was pumped onshore where the hydraulic power was used to drive an electrical generator . The system also powered a reverse osmosis desalination system producing freshwater from seawater. "By the year 2030, it is estimated that about two thirds of the entire world will be water-scarce. Only

0.01% of all the water in the world is accessible without seawater desalination," said Pichard. "Conventional desalination, however, is very energy intensive and a significant greenhouse gas emitter. A 500kL/day desalination plant emits the equivalent of nearly a million tonnes of CO2 per year. Carnegie was the first wave energy company to generate both power and freshwater onshore as part of its Perth Wave Energy Project." During the operational phase of the Perth Wave Energy Project, Carnegie retrieved the first and second CETO 5 unit on the first attempt by disconnecting the unit from the seabed foundation, using the hydraulic “quick connect” technology. The first unit was inspected, overhauled and reinstalled in the former position of Unit 2. This operation was deliberately carried out in the higher sea