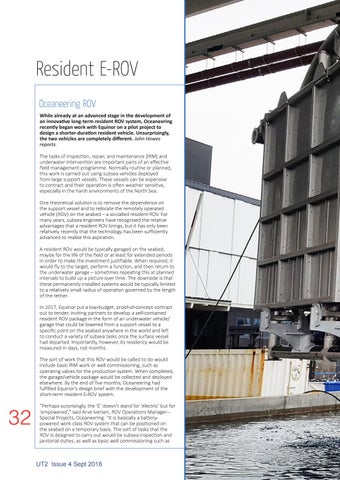 Resident E-ROV Oceaneering ROV While already at an advanced stage in the development of an innovative long-term resident ROV system, Oceaneering recently began work with Equinor on a pilot project to design a shorter-duration resident vehicle. Unsurprisingly, the two vehicles are completely different. John Howes reports. The tasks of inspection, repair, and maintenance (IRM) and underwater intervention are important parts of an effective field management programme. Normally routine or planned, this work is carried out using subsea vehicles deployed from large support vessels. These vessels can be expensive to contract and their operation is often weather sensitive, especially in the harsh environments of the North Sea. One theoretical solution is to remove the dependence on the support vessel and to relocate the remotely operated vehicle (ROV) on the seabed – a so-called resident ROV. For many years, subsea engineers have recognised the relative advantages that a resident ROV brings, but it has only been relatively recently that the technology has been sufficiently advanced to realise this aspiration. A resident ROV would be typically garaged on the seabed, maybe for the life of the field or at least for extended periods in order to make the investment justifiable. When required, it would fly to the target, perform a function, and then return to the underwater garage – sometimes repeating this at planned intervals to build up a picture over time. The downside is that these permanently installed systems would be typically limited to a relatively small radius of operation governed by the length of the tether. In 2017, Equinor put a low-budget, proof-of-concept contract out to tender, inviting partners to develop a self-contained resident ROV package in the form of an underwater vehicle/ garage that could be lowered from a support vessel to a specific point on the seabed anywhere in the world and left to conduct a variety of subsea tasks once the surface vessel had departed. Importantly, however, its residency would be measured in days, not months. The sort of work that this ROV would be called to do would include basic IRM work or well commissioning, such as operating valves for the production system. When completed, the garage/vehicle package would be collected and deployed elsewhere. By the end of five months, Oceaneering had fulfilled Equinor’s design brief with the development of the short-term resident E-ROV system.

“Perhaps surprisingly, the ‘E’ doesn’t stand for ‘electric’ but for ‘empowered’,” said Arve Iversen, ROV Operations Manager– Special Projects, Oceaneering. “It is basically a batterypowered work class ROV system that can be positioned on the seabed on a temporary basis. The sort of tasks that the ROV is designed to carry out would be subsea inspection and janitorial duties, as well as basic well commissioning such as