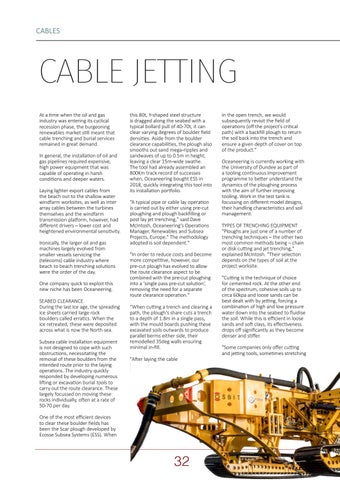 CABLE JETTING At a time when the oil and gas industry was entering its cyclical recession phase, the burgeoning renewables market still meant that cable trenching and burial services remained in great demand. In general, the installation of oil and gas pipelines required expensive, high power equipment that was capable of operating in harsh conditions and deeper waters. Laying lighter export cables from the beach out to the shallow water windfarm worksites, as well as inter array cables between the turbines themselves and the windfarm transmission platform, however, had different drivers – lower cost and heightened environmental sensitivity. Ironically, the larger oil and gas machines largely evolved from smaller vessels servicing the (telecoms) cable industry where beach to beach trenching solutions were the order of the day. One company quick to exploit this new niche has been Oceaneering. SEABED CLEARANCE During the last Ice age, the spreading ice sheets carried large rock boulders called erratics. When the ice retreated, these were deposited across what is now the North sea. Subsea cable installation equipment is not designed to cope with such obstructions, necessitating the removal of these boulders from the intended route prior to the laying operations. The industry quickly responded by developing numerous lifting or excavation burial tools to carry out the route clearance. These largely focussed on moving these rocks individually, often at a rate of 50-70 per day.

this 80t, Y-shaped steel structure is dragged along the seabed with a typical bollard pull of 40-70t, it can clear varying degrees of boulder field densities. Aside from the boulder clearance capabilities, the plough also smooths out sand mega-ripples and sandwaves of up to 0.5m in height, leaving a clear 15m-wide swathe. The tool had already assembled an 800Km track record of successes when, Oceaneering bought ESS in 2018, quickly integrating this tool into its installation portfolio. “A typical pipe or cable lay operation is carried out by either using pre-cut ploughing and plough backfilling or post lay jet trenching," said Dave McIntosh, Oceaneering's Operations Manager, Renewables and Subsea Projects, Europe." The methodology adopted is soil dependent." "In order to reduce costs and become more competitive, however, our pre-cut plough has evolved to allow the route clearance aspect to be combined with the pre-cut ploughing into a ‘single pass pre-cut solution’, removing the need for a separate route clearance operation." “When cutting a trench and clearing a path, the plough's share cuts a trench to a depth of 1.8m in a single pass, with the mould boards pushing these excavated soils outwards to produce parallel berms either side, their remodelled 35deg walls ensuring minimal in-fill. "After laying the cable

One of the most efficient devices to clear these boulder fields has been the Scar plough developed by Ecosse Subsea Systems (ESS). When

in the open trench, we would subsequently revisit the field of operations (off the project's critical path) with a backfill plough to return the soil back into the trench and ensure a given depth of cover on top of the product." Oceaneering is currently working with the University of Dundee as part of a tooling continuous improvement programme to better understand the dynamics of the ploughing process with the aim of further improving tooling. Work in the test tank is focussing on different model designs, their handling characteristics and soil management. TYPES OF TRENCHING EQUIPMENT "Ploughs are just one of a number of trenching techniques – the other two most common methods being – chain or disk cutting and jet trenching," explained McIntosh. "Their selection depends on the types of soil at the project worksite. "Cutting is the technique of choice for cemented rock. At the other end of the spectrum, cohesive soils up to circa 60kpa and loose sands can be best dealt with by jetting, forcing a combination of high and low pressure water down into the seabed to fluidise the soil. While this is efficient in loose sands and soft clays, its effectiveness drops off significantly as they become denser and stiffer. "Some companies only offer cutting and jetting tools, sometimes stretching