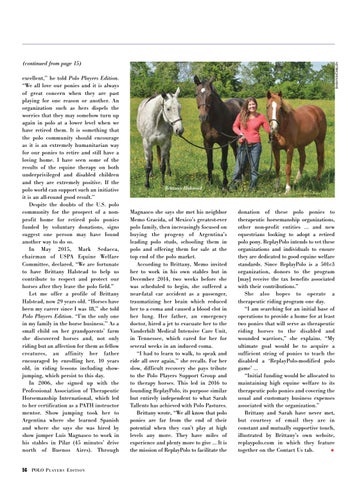 excellent,’’ he told Polo Players Edition. “We all love our ponies and it is always of great concern when they are past playing for one reason or another. An organization such as hers dispels the worries that they may somehow turn up again in polo at a lower level when we have retired them. It is something that the polo community should encourage as it is an extremely humanitarian way for our ponies to retire and still have a loving home. I have seen some of the results of the equine therapy on both underprivileged and disabled children and they are extremely positive. If the polo world can support such an initiative it is an all-round good result.’’ Despite the doubts of the U.S. polo community for the prospect of a nonprofit home for retired polo ponies funded by voluntary donations, signs suggest one person may have found another way to do so. In May 2015, Mark Sedacca, chairman of USPA Equine Welfare Committee, declared, “We are fortunate to have Brittany Halstead to help us contribute to respect and protect our horses after they leave the polo field.” Let me offer a profile of Brittany Halstead, now 29 years old. “Horses have been my career since I was 18,’’ she told Polo Players Edition. “I’m the only one in my family in the horse business.’’ As a small child on her grandparents’ farm she discovered horses and, not only riding but an affection for them as fellow creatures, an affinity her father encouraged by enrolling her, 10 years old, in riding lessons including showjumping, which persist to this day. In 2006, she signed up with the Professional Association of Therapeutic Horsemanship International, which led to her certification as a PATH instructor mentor. Show jumping took her to Argentina where she learned Spanish and where she says she was hired by show jumper Luis Magnasco to work in his stables in Pilar (45 minutes’ drive north of Buenos Aires). Through 56 POLO P L A Y E R S E D I T I O N

Magnasco she says she met his neighbor Memo Gracida, of Mexico’s greatest-ever polo family, then increasingly focused on buying the progeny of Argentina’s leading polo studs, schooling them in polo and offering them for sale at the top end of the polo market. According to Brittany, Memo invited her to work in his own stables but in December 2014, two weeks before she was scheduled to begin, she suffered a near-fatal car accident as a passenger, traumatizing her brain which reduced her to a coma and caused a blood clot in her lung. Her father, an emergency doctor, hired a jet to evacuate her to the Vanderbilt Medical Intensive Care Unit, in Tennessee, which cared for her for several weeks in an induced coma. “I had to learn to walk, to speak and ride all over again,’’ she recalls. For her slow, difficult recovery she pays tribute to the Polo Players Support Group and to therapy horses. This led in 2016 to founding ReplayPolo, its purpose similar but entirely independent to what Sarah Tallents has achieved with Polo Pastures. Brittany wrote, “We all know that polo ponies are far from the end of their potential when they can’t play at high levels any more. They have miles of experience and plenty more to give ... It is the mission of ReplayPolo to facilitate the

donation of these polo ponies to therapeutic horsemanship organizations, other non-profit entities ... and new equestrians looking to adopt a retired polo pony. ReplayPolo intends to vet these organizations and individuals to ensure they are dedicated to good equine welfare standards. Since ReplayPolo is a 501c3 organization, donors to the program [may] receive the tax benefits associated with their contributions.” She also hopes to operate a therapeutic riding program one day. “I am searching for an initial base of operations to provide a home for at least two ponies that will serve as therapeutic riding horses to the disabled and wounded warriors,” she explains. “My ultimate goal would be to acquire a sufficient string of ponies to teach the disabled a ‘ReplayPolo-modified polo game’ ... “Initial funding would be allocated to maintaining high equine welfare to its therapeutic polo ponies and covering the usual and customary business expenses associated with the organization.” Brittany and Sarah have never met, but courtesy of email they are in constant and mutually supportive touch, illustrated by Brittany’s own website, replaypolo.com in which they feature together on the Contact Us tab. u 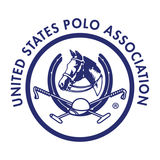