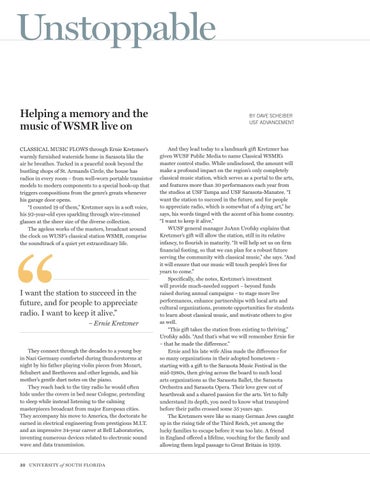 Unstoppable Helping a memory and the music of WSMR live on CLASSICAL MUSIC FLOWS through Ernie Kretzmer’s warmly furnished waterside home in Sarasota like the air he breathes. Tucked in a peaceful nook beyond the bustling shops of St. Armands Circle, the house has radios in every room – from well-worn portable transistor models to modern components to a special hook-up that triggers compositions from the genre’s greats whenever his garage door opens. “I counted 19 of them,” Kretzmer says in a soft voice, his 92-year-old eyes sparkling through wire-rimmed glasses at the sheer size of the diverse collection. The ageless works of the masters, broadcast around the clock on WUSF’s classical station WSMR, comprise the soundtrack of a quiet yet extraordinary life.

I want the station to succeed in the future, and for people to appreciate radio. I want to keep it alive.”

They connect through the decades to a young boy in Nazi Germany comforted during thunderstorms at night by his father playing violin pieces from Mozart, Schubert and Beethoven and other legends, and his mother’s gentle duet notes on the piano. They reach back to the tiny radio he would often hide under the covers in bed near Cologne, pretending to sleep while instead listening to the calming masterpieces broadcast from major European cities. They accompany his move to America, the doctorate he earned in electrical engineering from prestigious M.I.T. and an impressive 34-year career at Bell Laboratories, inventing numerous devices related to electronic sound wave and data transmission.

And they lead today to a landmark gift Kretzmer has given WUSF Public Media to name Classical WSMR’s master control studio. While undisclosed, the amount will make a profound impact on the region’s only completely classical music station, which serves as a portal to the arts, and features more than 30 performances each year from the studios at USF Tampa and USF Sarasota-Manatee. “I want the station to succeed in the future, and for people to appreciate radio, which is somewhat of a dying art,” he says, his words tinged with the accent of his home country. “I want to keep it alive.” WUSF general manager JoAnn Urofsky explains that Kretzmer’s gift will allow the station, still in its relative infancy, to flourish in maturity. “It will help set us on firm financial footing, so that we can plan for a robust future serving the community with classical music,” she says. “And it will ensure that our music will touch people’s lives for years to come.” Specifically, she notes, Kretzmer’s investment will provide much-needed support – beyond funds raised during annual campaigns – to stage more live performances, enhance partnerships with local arts and cultural organizations, promote opportunities for students to learn about classical music, and motivate others to give as well. “This gift takes the station from existing to thriving,” Urofsky adds. “And that’s what we will remember Ernie for – that he made the difference.” Ernie and his late wife Alisa made the difference for so many organizations in their adopted hometown – starting with a gift to the Sarasota Music Festival in the mid-1980s, then giving across the board to such local arts organizations as the Sarasota Ballet, the Sarasota Orchestra and Sarasota Opera. Their love grew out of heartbreak and a shared passion for the arts. Yet to fully understand its depth, you need to know what transpired before their paths crossed some 35 years ago. The Kretzmers were like so many German Jews caught up in the rising tide of the Third Reich, yet among the lucky families to escape before it was too late. A friend in England offered a lifeline, vouching for the family and allowing them legal passage to Great Britain in 1939.