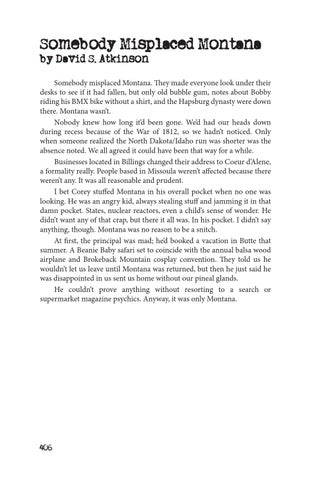 Somebody Misplaced Montana by David S. Atkinson Somebody misplaced Montana. They made everyone look under their desks to see if it had fallen, but only old bubble gum, notes about Bobby riding his BMX bike without a shirt, and the Hapsburg dynasty were down there. Montana wasn’t. Nobody knew how long it’d been gone. We’d had our heads down during recess because of the War of 1812, so we hadn’t noticed. Only when someone realized the North Dakota/Idaho run was shorter was the absence noted. We all agreed it could have been that way for a while. Businesses located in Billings changed their address to Coeur d’Alene, a formality really. People based in Missoula weren’t affected because there weren’t any. It was all reasonable and prudent. I bet Corey stuffed Montana in his overall pocket when no one was looking. He was an angry kid, always stealing stuff and jamming it in that damn pocket. States, nuclear reactors, even a child’s sense of wonder. He didn’t want any of that crap, but there it all was. In his pocket. I didn’t say anything, though. Montana was no reason to be a snitch. At first, the principal was mad; he’d booked a vacation in Butte that summer. A Beanie Baby safari set to coincide with the annual balsa wood airplane and Brokeback Mountain cosplay convention. They told us he wouldn’t let us leave until Montana was returned, but then he just said he was disappointed in us sent us home without our pineal glands. He couldn’t prove anything without resorting to a search or supermarket magazine psychics. Anyway, it was only Montana.

Quarterly fiction magazine. It gets weird in here. 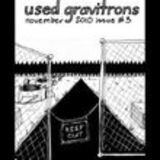