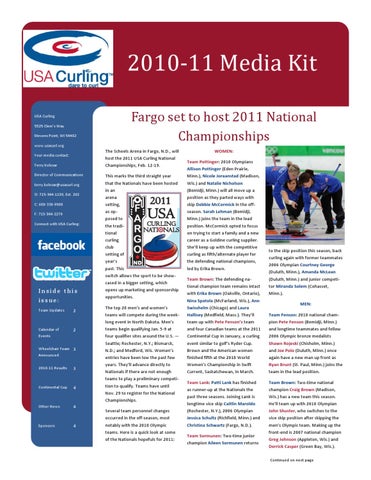 Inside this issue: Team Updates

This marks the third straight year that the Nationals have been hosted in an arena setting, as op‐ posed to the tradi‐ tional curling club setting of year’s past. This switch allows the sport to be show‐ cased in a bigger setting, which opens up marketing and sponsorship opportunities. The top 20 men’s and women’s teams will compete during the week‐ long event in North Dakota. Men’s teams begin qualifying Jan. 5‐9 at four qualifier sites around the U.S. — Seattle; Rochester, N.Y.; Bismarck, N.D.; and Medford, Wis. Women’s entries have been low the past few years. They’ll advance directly to Nationals if there are not enough teams to play a preliminary competi‐ tion to qualify. Teams have until Nov. 29 to register for the National Championships. Several team personnel changes occurred in the off‐season, most notably with the 2010 Olympic teams. Here is a quick look at some of the Nationals hopefuls for 2011:

2010 national champion Pete Fenson (above) is seeking his seventh national title this season and another chance at a world championship medal.

2011 U.S. Nationals Qualifying Round (men only)

with all members coming from John’s club — the St. Paul Curling Club. His vice skip is Jeff Puleo, who was the runner‐up in the 2010 Nationals. 2006 Olympians Cassie (Johnson) Potter and Jamie (Johnson) Haskell will continue to focus on their careers but plan to compete in the Mixed Doubles Championship this year. In addition, 2006 Olympian Mau‐ Other team notes: 2010 Olympian John reen (Brunt) Clark is continuing her law Benton (St. Michael, Minn.) moved from school studies and is taking a break from the lead position to skip his own team, competitive curling for the moment.

Update: Due to a shoulder injury requiring surgery, McDonald will be replaced with one of three alter‐ nates this season.

The Americans captured the gold at the 2010 World Senior Championship this spring in Russia.

Fenson, Brown headed to Continental Cup 2010 U.S. national champions Pete Fenson (Bemidji, Minn.) and Erika Brown (Oakville, Ontario) will lead their teams at the 2011 Continental Cup of Curling this winter in Canada as the Cup returns from a year hiatus.

Fenson and teammates Shawn Rojeski (Chisholm, Minn.), Joe Polo (Duluth, Minn.) and Ryan Brunt (St. Paul, Minn.) along with Brown and her teammates Nina Spatola (McFarland, Wis.), Ann Swisshelm The 2011 Cup is set for Jan. 13‐16 in St. Albert, (Chicago) and Laura Hallisey (Medfield, Mass.) will Alberta, near Edmonton. This is the seventh edition team up with Canadian teams skipped by 2010 Olympians Kevin Martin and Cheryl Bernard and of this Ryder Cup‐like event and will be sponsored by the World Financial Group. The Continental Cup 2010 Canadian champions Jennifer Jones and Kevin features Team North America composed of four Koe in skins, mixed skins, singles, mixed doubles, Canadian and two U.S. teams taking on six of the top and team competitions during the four‐day event at European and Asian teams representing Team Servus Credit Union Place.

The World Curling Federation has announced five of its six teams. Representing Team World will be rinks skipped by 2010 Olympic silver medalist Thomas Ulsrud of Norway; 2010 Olympic bronze medalist Bingyu Wang of China; 2010 Olympic fourth‐place finishers Niklas Edin of Sweden and Mirjam Ott of Switzerland; and 2010 women’s world champion Andrea Schopp of Germany. This will be the seventh Continental Cup, all hosted in Canada. The event began in 2002 in Regina, Sas‐ katchewan, and since then each side has won three titles.

What else is new? TV:

in late September after tryouts. He’ll be replaced by one of the team’s alternates after their skills are evalu‐ As part of the joint marketing agreement with the U.S. This summer the first Youth Olympic Games was held ated at competitions leading up to the 2011 Wheel‐ Olympic Committee, the finals of the 2011 National in Singapore. In 2012, winter sports will be showcased chair World Championship in Prague, Czech Republic. Jan. 13‐22 in Innsbruck, Austria. USA Curling will have Championships will be webstreamed live. a selection process next season for selecting its teams Nationals update: Webscoring: for this inaugural event. The Games are forecasted to Two direct berths to the National Championships will Live end‐by‐end webscoring will be available from all bring 1,058 athletes between ages 14 and 18 from be awarded to the top two men’s and women’s teams over 70 nations to compete in 7 sports that also will of our championship events this season. Check the based on performances this fall on the World Curling be featured in the 2014 Olympic Winter Games in USA Curling website for links. Tour. Those teams will be able to forgo the qualifying Sochi. rounds in January and prepare directly for the Nation‐ Winter World University Games: als Feb. 12‐19 at the Scheels Arena in Fargo, N.D. Injury report: Turkey will host the 2011 Winter World University 2010 Paralympian Patrick McDonald will undergo Games Jan. 27‐Feb. 6. USA’s curling teams will be season‐ending shoulder surgery in October. McDonald determined Nov. 12‐14 in Fargo, N.D. , at a team has qualified for the national wheelchair curling team competition event.

Thank you to our sponsors: 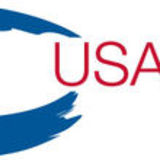