The Truth Behind Wasserman-Schultz's letter 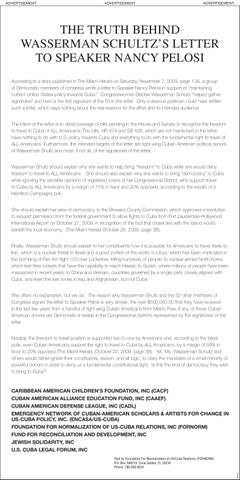 THE TRUTH BEHIND WASSERMAN SCHULTZ’S LETTER TO SPEAKER NANCY PELOSI According to a story published in The Miami Herald on Saturday, November 7, 2009, page 13A, a group of Democratic members of congress wrote a letter to Speaker Nancy Pelosi in support of “maintaining current United States policy towards Cuba.” Congresswoman Debbie Wasserman Schultz “helped gather signatures” and hers is the first signature of the 53 in the letter. Only a devious politician could have written such a letter, which says nothing about the real reasons for the effort and its intended audience.

The intent of the letter is to derail passage of bills pending in the House and Senate to recognize the freedom to travel to Cuba of ALL Americans. The bills, HR 874 and SB 428, which are not mentioned in the letter, have nothing to do with U.S. policy towards Cuba and everything to do with the fundamental right to travel of ALL Americans. Furthermore, the intended targets of the letter are right wing Cuban American political donors of Wasserman Shultz and most, if not all, of the signatories of the letter.

Wasserman Shultz should explain why she wants to help bring “freedom” to Cuba while she would deny freedom to travel to ALL Americans. She should also explain why she wants to bring “democracy” to Cuba while ignoring the sensible opinions of registered voters of her Congressional District, who support travel to Cuba by ALL Americans by a margin of 75% in favor and 20% opposed, according to the results of a Hamilton Campaigns poll.

She should explain her view of democracy to the Broward County Commission, which approved a resolution to request permission from the federal government to allow flights to Cuba from Fort Lauderdale-Hollywood International Airport on October 27, 2009, in recognition of the fact that closer ties with the island would benefit the local economy. (The Miami Herald October 28, 2009, page 3B).

Finally, Wasserman Shultz should explain to her constituents how it is possible for Americans to travel freely to Iran, which is a nuclear threat to Israel and a good portion of the world; to Libya, which has been implicated in the bombing of Pan Am flight 103 over Lockerbie, killing hundreds of people; to nuclear-armed North Korea, which test-fires rockets that have the capability to reach Hawaii; to Sudan, where millions of people have been massacred in recent years; to China and Vietnam, countries governed by a single party closely aligned with Cuba, and even the war zones in Iraq and Afghanistan, but not Cuba

She offers no explanation, but we do. The reason why Wasserman Shultz and the 52 other members of Congress signed the letter to Speaker Pelosi is very simple, the over $500,000.00 that they have received in the last few years from a handful of right wing Cuban Americans from Miami. Few, if any, of these Cuban American donors are Democrats or reside in the Congressional districts represented by the signatories of the letter.

Notably, the freedom to travel position is supported two to one by Americans and, according to the latest polls, even Cuban Americans support the right to travel to Cuba by ALL Americans, by a margin of 59% in favor to 29% opposed (The Miami Herald, October 22, 2009, page 3B). Yet, Ms. Wasserman Schultz and others would rather ignore their constituents, reason, and all logic, to obey the mandates of a small minority of powerful donors in order to deny us a fundamental constitutional right. Is this the kind of democracy they wish to bring to Cuba?

The Truth Behind Wasserman-Schultz's letter

This is the advertorial that ran in Congresswoman Wasserman-Schultz's newspaper, the Sun Sentinel in her congressional district in Florida.