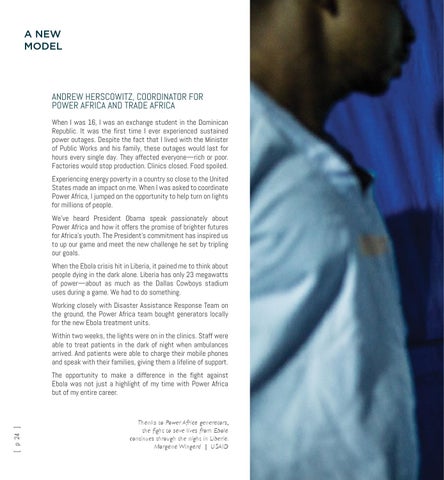 ANDREW HERSCOWITZ, COORDINATOR FOR POWER AFRICA AND TRADE AFRICA When I was 16, I was an exchange student in the Dominican Republic. It was the first time I ever experienced sustained power outages. Despite the fact that I lived with the Minister of Public Works and his family, these outages would last for hours every single day. They affected everyone—rich or poor. Factories would stop production. Clinics closed. Food spoiled. Experiencing energy poverty in a country so close to the United States made an impact on me. When I was asked to coordinate Power Africa, I jumped on the opportunity to help turn on lights for millions of people. We’ve heard President Obama speak passionately about Power Africa and how it offers the promise of brighter futures for Africa’s youth. The President’s commitment has inspired us to up our game and meet the new challenge he set by tripling our goals. When the Ebola crisis hit in Liberia, it pained me to think about people dying in the dark alone. Liberia has only 23 megawatts of power—about as much as the Dallas Cowboys stadium uses during a game. We had to do something. Working closely with Disaster Assistance Response Team on the ground, the Power Africa team bought generators locally for the new Ebola treatment units. Within two weeks, the lights were on in the clinics. Staff were able to treat patients in the dark of night when ambulances arrived. And patients were able to charge their mobile phones and speak with their families, giving them a lifeline of support.

The opportunity to make a difference in the fight against Ebola was not just a highlight of my time with Power Africa but of my entire career.

Thanks to Power Africa generators, the fight to save lives from Ebola continues through the night in Liberia. Morgana Wingard | USAID

Drawn from more than 80 interviews with USAID staff around the world, this book is not only a record of an Agency transformed but also a celebration of those who transformed it. In hearing directly from our staff across the globe, I hope you take a moment to reflect on their courage, talent, and commitment to the American people and the communities we serve.