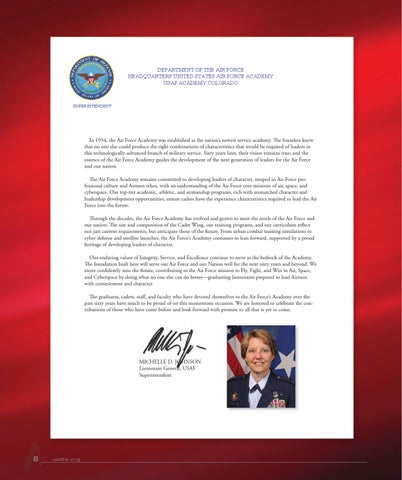 In 1954, the Air Force Academy was established as the nation’s newest service academy. The founders knew that no one else could produce the right combinations of characteristics that would be required of leaders in this technologically-advanced branch of military service. Sixty years later, their vision remains true; and the essence of the Air Force Academy guides the development of the next generation of leaders for the Air Force and our nation. The Air Force Academy remains committed to developing leaders of character, steeped in Air Force professional culture and Airmen ethos, with an understanding of the Air Force core missions of air, space, and cyberspace. Our top-tier academic, athletic, and airmanship programs, rich with unmatched character and leadership development opportunities, ensure cadets have the experience characteristics required to lead the Air Force into the future. Through the decades, the Air Force Academy has evolved and grown to meet the needs of the Air Force and our nation. The size and composition of the Cadet Wing, our training programs, and our curriculum reflect not just current requirements, but anticipate those of the future. From urban combat training simulations to cyber defense and satellite launches, the Air Force’s Academy continues to lean forward, supported by a proud heritage of developing leaders of character. Our enduring values of Integrity, Service, and Excellence continue to serve as the bedrock of the Academy. The foundation built here will serve our Air Force and our Nation well for the next sixty years and beyond. We move confidently into the future, contributing to the Air Force mission to Fly, Fight, and Win in Air, Space, and Cyberspace by doing what no one else can do better—graduating lieutenants prepared to lead Airmen with commitment and character. The graduates, cadets, staff, and faculty who have devoted themselves to the Air Force’s Academy over the past sixty years have much to be proud of on this momentous occasion. We are honored to celebrate the contributions of those who have come before and look forward with promise to all that is yet to come. 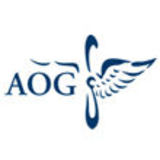 U.S. Air Force Academy Association of Graduates presents Checkpoints magazine. It is published in March, June, September and December and is...

U.S. Air Force Academy Association of Graduates presents Checkpoints magazine. It is published in March, June, September and December and is...