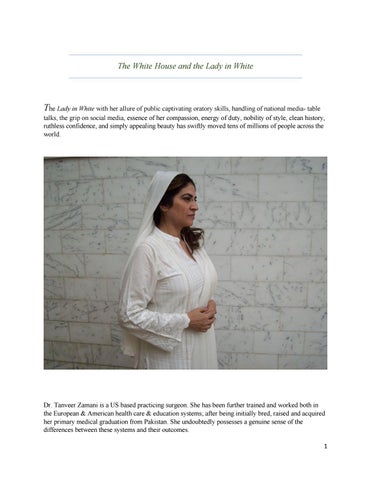 The White House and the Lady in White

The Lady in White with her allure of public captivating oratory skills, handling of national media- table talks, the grip on social media, essence of her compassion, energy of duty, nobility of style, clean history, ruthless confidence, and simply appealing beauty has swiftly moved tens of millions of people across the world.

Dr. Tanveer Zamani is a US based practicing surgeon. She has been further trained and worked both in the European & American health care & education systems; after being initially bred, raised and acquired her primary medical graduation from Pakistan. She undoubtedly possesses a genuine sense of the differences between these systems and their outcomes. 1

Very soon, she has become a symbol of selflessness, relentless loyalty to abused humans around and a standard bearer for the rights of the truly downtrodden. Someone with a natural nobility who was classless and who proved in the last year that she needed no political title or appointment to continue to generate her particular mystic brand of appeal and rule. A very Pakistani girl inside an American woman who transcended nationality beyond borders, color, race and religions for the cause of global peace in the era of DAISH. She hosts a common ground for the Muslim & Western cultures. She has a unique blend of not only truly representing America; delineating the importance of American interests & defining its policies, but at the same time, she epitomizes and redefines post 9-11 Islam and stands out to prevent not only Islam but other religions’ serenity from the terror of DAISH. She believes real success comes when we rise after we fall; she has shown us through her invigorating public rallies and speeches that through undying faith and steadfast love, each of us can make this world a better place. She has her unique ability to summon extraordinary strength and courage in the face of adversity, to navigate the storm and never lose her way and that she learnt from her vigorous surgical training under Royal college of Surgeons in Ireland and American College of Surgeons-US. Nevertheless, we could not ignore her seasoned political training in Sindh medical college -Karachi, in the era of political college students’ unions/ elections Even fifteen years after the fall of Iraq, the peace has not been achieved. The current turmoil and regional insecurities are 1) An unremitting Middle East uprising, 2) Continued war on terror at the Pak-Afghan border. 3) Polarization of Talibans into different negotiable groups. 4) Indulgence of Indian BLA /RAW intelligence service agents in Pakistan and invasion of Baluchistan by Indian on-duty Government officers. 5) DAISH/ISIS. 6) CPEC conflicts of interests. 7) Constitutional struggle of Military ZarbeAzb against corruption. 8) An attitude of Kashmiris seeking an independent state, regardless of Pakistani support. 9) Failure of dialogues between the regional heads and 10) The absolute absence in Pakistan of the prime leadership. Hence West concerns about unstable nuclear arsenal- centers versus global safety, despite disinterest, and a national American wish to pull out themselves from the regions of conflicts, they got to remain engaged in addressing those regional conflicts that constitute the basics of Middle Eastern and Pakistan’s diplomacy, which has five possible futures: a State adrift, authoritarian state, Islamic state, moderate state or state collapse. Historically, while American involvement has been condemned by the Muslims, the Islamic world's personalist leaders such as Bhutto, Saddam, Gaddafi, Arafat, Qumaini or Ahmadinejad were totally discouraged by the US as well. This provoked strong differences; hence, it remained difficult to find a common pathway between the West and the Muslim world. However, this clearly mandates the need of nurturing a leader who speaks a common word out of the differences between the West and Muslims. Who despite being a Muslim, calms down the retaliation of the Muslims against the West, make every effort to present West in its most effective and acceptable manner to the Islamic world. In the mist of DAISH and Middle East -South Asia turmoil and after a long-term struggle of American both civil / military efforts; very abruptly, a South Asian descent, American Muslim lady; a Lady in white, appears in her natural nobility who seeks a world that holds believers of all the religions, prophets, angels and the Holy books and who respect children women, prisoners, poor and the people with special needs, the most.

She has a strategic plan to optimize the religion based global extremism. She plans to pull out the teenagers & adolescents who are being recruited in DAISH from across the world, who apathetically submit to violence and suicidal bombings due to their own socioeconomic responsibilities and poverty. She sounds like a common voice if not language, common appearance if not culture, common effort if not faith, common future if not past and a common ground if not land. The Islamic world particularly, Pakistan has been waiting for such visionary leadership that would be different from the stereotype past leaderships who keep cashing the blood of their ancestors or relatives in politics and have been using politics as a commercial industry. This lady in white who explains the Muslim world that the white House is not and never will be at war with Islam, but fighting against those who are distorting Islam and clarifies that in fact, it is agonizing for America to lose their young men and women. It is costly and politically difficult to continue the fight at the Pak -Afghan region. A leader who has the ability to elucidate that the sweeping change brought by modernity & globalization led many Muslims to view the West as hostile to the traditions of Islam & that the West is not! She is an institutionalized product of both cultures, languages, faiths, periods and lands. She displays good will, intelligence, high education, political skills, noncommercial passion, and holds an international ground reality-experience. She does not only express great views, but has captivating oratory. She believes in an institutionalized innovative politics & reconciliation as a policy, and she hosts a common ground for the Muslim and Western cultures. Currently, no one, but one person on horizon erupts who can offer a common ground to focus on the globally secured future. This is probably the voice; this is perhaps that face, this is most certainly the first non-manorial vigor observed in years in Pakistan, a visible change in leadership from a landocrat to a Democrat; this is almost the moment people have been waiting for the last 70 years to bring a change in the destiny of Pakistan. She believes that feasibility of the common practice of the economic corruption in Pakistan due to the nonexistent law & order secondary to the lack of implication of the existing constitutional system is naively facilitating terrorism in Pakistan. On May 3, 2016, she launched a movement for Pakistani people, within and abroad; PAKISTAN PEOPLE’S MOVEMENT (PPM) and insisted youth to mobilize themselves and stop corruption at every level and make Pakistan a safer and cleaner place for holding nuclear assets proudly and independently, where other countries don’t have to breach Pakistani Sovereignty, to keep Pakistanis safe and instead misfire and kill the innocents. This movement encourages overseas Pakistanis from all the countries and all the religions to re-image Pakistan, as an independent nuclear leader of the Islamic world that reflects a true picture of Islam. This movement spreads the word out of the “Global peace” as the prophet Mohammad (May peace be upon him) was designated as the ‘Rahmat ulli alameen’ means ‘Bliss for the entire Universe’, not only for his followers. The PPM reminds Pakistanis to care about the mankind across the borders since the constitution of Pakistan is the unique constitution that emphasized about the global welfare instead of only State welfare. Dr. Tanveer Zamani is a great discovered resource of reconciliation, liberation and peace that appears in white; a refined gem erupted on the political silver screen, with a background unusually clean, found 3

mounted onto the canvas of Pak-American Politics with nonexistent Pakistani representation on the diplomatic front and every possible impending crisis in between. The movement was launched in Jeddah- KSA, through a press conference and the first Pakistan Peopleâ&#x20AC;&#x2122;s Movement, Shuhadae Zarbe Azb Secretariat was inaugurated in Dubai, this movement invites all within and abroad Pakistanis to a safer, cleaner platform to participate in general elections on non-commercial tickets and play their definitive role in law making policies to produce an innovative system of energy, economy, education, health, law & order and homeland security. As a woman in politics, not needed to mention that Zamani would have to face the same struggle that Hilary Clinton had been facing to-date, since Hilary Clinton or Tanveer Zamani, neither are the daughters of legendary political national PMs like Jawaharlal Nehru, Zulfiqar Ali Bhutto, Mujeebur Rehman, whom daughters; Indra Gandhi, Benazir Bhutto and Sheikh Haseena Wazed had no difficulty in achieving all public sympathies, hence forth office positions. A lady in white is certainly anticipated to be facing tremendous opposition at all levels, of all kinds since she is determined to eliminate regional terrorism and corruption without any negotiation. She brings her movement out there for the Youth to rise through meritocracy and bring an end to landocracy. About Tanveer Zamani: The White House and the Lady in White.

Dr. Tanveer Zamani - A Pakistani descent - US citizen and a surgeon, who has launched a global campaign and lobbying to positively re-image...

About Tanveer Zamani: The White House and the Lady in White.

Dr. Tanveer Zamani - A Pakistani descent - US citizen and a surgeon, who has launched a global campaign and lobbying to positively re-image...