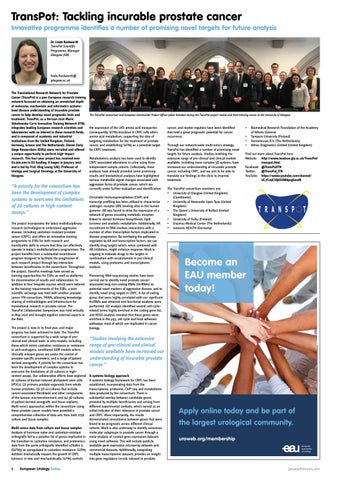 linda.Rushworth@ glasgow.ac.uk The Translational Research Network for Prostate Cancer (TransPot) is a pan-European research training network focussed on obtaining an unmatched depth of molecular, mechanistic and informatics systemslevel disease understanding of incurable prostate cancer to help develop novel prognostic tools and treatment. TransPot, as a Horizon 2020 Marie Skłodowska-Curie Innovative Training Network (ITN), integrates leading European research scientists and laboratories with an interest in these research fields, and is composed of academic and industrial institutions from the United Kingdom, Finland, Germany, Greece and The Netherlands. Eleven Early Stage Researchers (ESRs) were recruited and offered a unique opportunity to perform high-impact research. This four-year project has received over €2,500,000 in EU funding. It began in January 2017 and is led by Prof. Hing Leung (UK), Professor of Urology and Surgical Oncology at the University of Glasgow.

“A priority for the consortium has been the development of complex systems to overcome the limitations of 2D cultures in high-content assays.” The project incorporates the latest multidisciplinary research technologies to understand aggressive disease, including castration-resistant prostate cancer (CRPC), and offers an innovative training programme to ESRs for both research and transferable skills to ensure that they can effectively operate in today's multidisciplinary programmes. The project benefits from a substantial secondment program designed to facilitate the progression of each research project through key interaction between beneficiaries in the consortium. Throughout the project, TransPot meetings have served as training opportunities for ESRs, as well as platforms for dissemination of results and collaboration. In addition to four bespoke courses which were tailored to the training requirements of the ESRs, a joint scientific exchange was held with another prostate cancer ITN consortium, TRAIN, allowing knowledge sharing of methodologies and infrastructure for translational research in prostate cancer. The TransPot Collaborative Symposium was held virtually in May 2020 and brought together external experts in the field. The project is now in its final year, and major progress has been achieved to date. The TransPot consortium is supported by a wide range of preclinical and clinical tools: in vitro models, including those which mimic castration resistance or resistance to anti-androgens; conditional GEM models where clinically relevant genes are under the control of prostate-specific promoters; and a range of patient derived xenografts. A priority for the consortium has been the development of complex systems to overcome the limitations of 2D cultures in highcontent assays. Our collaborative efforts have explored (1) cultures of human induced pluripotent stem cells (iPSCs), (2) primary prostate organoids from whole human prostates, (3) 3D co-cultures that include cancer-associated fibroblasts and other components of the tumour microenvironment, and (4) 3D cultures of patient derived xenografts and tissue explants. Multi-omics approaches within the consortium using these prostate cancer models have provided a comprehensive collection of data sets from both 2/3D culture and tissue samples.

the expression of the LAT1 amino acid transporter. Consequently, SLFN5 knockout in CRPC cells alters amino acid metabolism, supporting the idea of targeting metabolism for the treatment of prostate cancer, and establishing SLFN5 as a potential target for CRPC treatment. Metabolomics analysis has been used to identify CRPC-associated alterations in urine using three independent sample cohorts. Collectively, these analyses have already provided some promising results and biostatistical analyses have highlighted various metabolite signal changes associated with aggressive forms of prostate cancer, which are currently under further evaluation and identification. Chromatin immunoprecipitation (ChIP) and transcript profiling has been utilised to characterise androgen receptor (AR) binding sites in the human genome. AR was found to drive the expression of a network of genes encoding metabolic enzymes linked to steroid hormone biosynthesis, lipid turnover and anabolic metabolism. Additionally, AR recruitment to DNA involves interactions with a number of other transcription factors implicated in disease progression. By overlaying the pathways regulated by AR and transcription factors, we can identify drug targets which, when combined with AR inhibitors, might enhance response. Work is ongoing to evaluate drugs to the targets in combination with enzalutamide in pre-clinical models, using proteomic and transcriptomic analysis. Pioneering RNA-sequencing studies have been carried out to identify novel prostate cancerassociated long non-coding RNAs (lncRNAs) as potential novel markers of aggressive disease, and to identify novel drug targets in CRPC. A list of coding genes that were highly correlated with our significant lncRNAs was obtained and functional analyses were performed. GO analysis identified several cell-cyclerelated terms highly enriched in the coding gene list, and KEGG analysis revealed that these genes were enriched in the p53, cell cycle and focal adhesion pathways; most of which are implicated in cancer biology.

Through our network-wide multi-omics strategy, TransPot has identified a number of promising novel targets for future analysis. Studies involving the extensive range of pre-clinical and clinical models available, including more complex 3D systems, have increased our understanding of incurable prostate cancer, including CRPC, and we aim to be able to translate our findings to the clinic to improve treatment.

“Studies involving the extensive range of pre-clinical and clinical models available have increased our understanding of incurable prostate cancer.”

A systems biology approach A systems biology framework for CRPC has been established, incorporating data from the transcriptome, proteome, ChIP-seq and metabolome data produced by the consortium. There is substantial overlap between candidate genes provided by multiple beneficiaries and arising from different experimental contexts, which served as an initial indicator of their relevance in prostate cancer and CRPC. More importantly, the results demonstrated concordance between genes that were found to be prognostic across different clinical Multi-omics data from culture and tissue samples cohorts. Work is also underway to identify consensus Analysis of hormone naïve and castration-resistant molecular subgroups in prostate cancer through a orthografts led to a putative list of genes implicated in meta-analysis of curated gene expression datasets the transition to castration resistance, and proteomics using novel software. This will include publicly data from the same orthografts identified schlafen 5 available gene expression microarray datasets and (SLFN5) as upregulated in castration resistance. SLFN5 commercial datasets. Additionally, integrating deletion dramatically impairs the growth of CRPC multiple transcriptomic datasets provides an insight tumours in vivo, and mechanistically, SLFN5 controls into gene regulatory circuits relevant to prostate 8

cancer, and master regulons have been identified that hold a great prognostic potential for cancer recurrence.

Apply online today and be part of the largest urological community. uroweb.org/membership 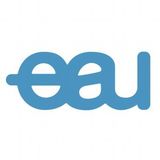 European Urology Today is the official newsletter of the European Association of Urology.

European Urology Today is the official newsletter of the European Association of Urology.