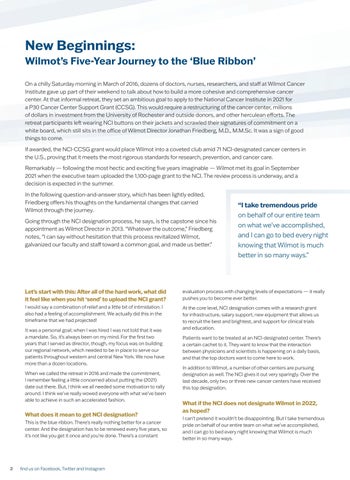 New Beginnings: Wilmot’s Five-Year Journey to the ‘Blue Ribbon’ On a chilly Saturday morning in March of 2016, dozens of doctors, nurses, researchers, and staff at Wilmot Cancer Institute gave up part of their weekend to talk about how to build a more cohesive and comprehensive cancer center. At that informal retreat, they set an ambitious goal to apply to the National Cancer Institute in 2021 for a P30 Cancer Center Support Grant (CCSG). This would require a restructuring of the cancer center, millions of dollars in investment from the University of Rochester and outside donors, and other herculean efforts. The retreat participants left wearing NCI buttons on their jackets and scrawled their signatures of commitment on a white board, which still sits in the office of Wilmot Director Jonathan Friedberg, M.D., M.M.Sc. It was a sign of good things to come. If awarded, the NCI-CCSG grant would place Wilmot into a coveted club amid 71 NCI-designated cancer centers in the U.S., proving that it meets the most rigorous standards for research, prevention, and cancer care. Remarkably — following the most hectic and exciting five years imaginable — Wilmot met its goal in September 2021 when the executive team uploaded the 1,100-page grant to the NCI. The review process is underway, and a decision is expected in the summer. In the following question-and-answer story, which has been lightly edited, Friedberg offers his thoughts on the fundamental changes that carried Wilmot through the journey. Going through the NCI designation process, he says, is the capstone since his appointment as Wilmot Director in 2013. “Whatever the outcome,” Friedberg notes, “I can say without hesitation that this process revitalized Wilmot, galvanized our faculty and staff toward a common goal, and made us better.”

Let’s start with this: After all of the hard work, what did it feel like when you hit ‘send’ to upload the NCI grant?

evaluation process with changing levels of expectations — it really pushes you to become ever better.

I would say a combination of relief and a little bit of intimidation. I also had a feeling of accomplishment. We actually did this in the timeframe that we had projected!

At the core level, NCI designation comes with a research grant for infrastructure, salary support, new equipment that allows us to recruit the best and brightest, and support for clinical trials and education.

It was a personal goal; when I was hired I was not told that it was a mandate. So, it’s always been on my mind. For the first two years that I served as director, though, my focus was on building our regional network, which needed to be in place to serve our patients throughout western and central New York. We now have more than a dozen locations. When we called the retreat in 2016 and made the commitment, I remember feeling a little concerned about putting the (2021) date out there. But, I think we all needed some motivation to rally around. I think we’ve really wowed everyone with what we’ve been able to achieve in such an accelerated fashion.

What does it mean to get NCI designation? This is the blue ribbon. There’s really nothing better for a cancer center. And the designation has to be renewed every five years, so it’s not like you get it once and you’re done. There’s a constant

“I take tremendous pride on behalf of our entire team on what we’ve accomplished, and I can go to bed every night knowing that Wilmot is much better in so many ways.”

Patients want to be treated at an NCI-designated center. There’s a certain cachet to it. They want to know that the interaction between physicians and scientists is happening on a daily basis, and that the top doctors want to come here to work. In addition to Wilmot, a number of other centers are pursuing designation as well. The NCI gives it out very sparingly. Over the last decade, only two or three new cancer centers have received this top designation.

What if the NCI does not designate Wilmot in 2022, as hoped? I can’t pretend it wouldn’t be disappointing. But I take tremendous pride on behalf of our entire team on what we’ve accomplished, and I can go to bed every night knowing that Wilmot is much better in so many ways. 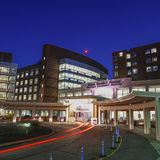